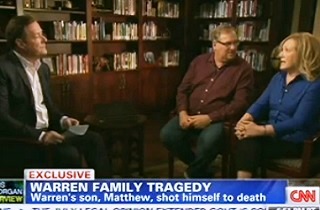 Saddlebrook megachurch Pastor Rick Warren and his wife, Kay Warren, lost their son Matthew Warren in April, when he committed suicide using a handgun he had purchased illegally on the internet. In a Tuesday night interview with CNN’s Piers Morgan, the Warrens revealed that they had known about Matthew’s gun purchase, which led Morgan to ask the couple if it would have made any difference if they had reported the illegal gun to the police.

Toward the end of the interview, Morgan revisited the subject. “The what if that springs to mind for me,” Morgan said, “if I was in your position, and thank God I’m not, if I had been, what if, knowing he’d acquired an illegal gun, you had reported that to the authorities – you’ve already said, Kay, that he always said ‘if you call the police, I’ll kill myself, so obviously an incredibly difficult what if – but do you think that it could have made any difference?”

“Absolutely,” Pastor Warren cut in as Morgan finished the question.

“I don’t think it would have made any difference in the fact that if you are determined, you’re going to figure out a way to take your life,” Pastor Warren replied.

“He was determined,” Mrs. Warren said. “Sitting here in this moment, it’s very clinical. It’s very — we can second guess all over the place. But in that moment when you have a mentally ill person who’s telling you they’re going to take their life, and it’s your son and you don’t want him to take his life, the choices — mental illness creates such horrendous choices for families.”

Without passing judgment on, or rendering an opinion about, what the Warrens said about their incredibly tough situation, Morgan probably should have shared, with his audience, the important fact that mental health professionals almost unanimously agree that, if you know someone who is threatening to commit suicide, that you take the threat seriously, and immediately seek emergency help. As a broadcaster, Piers Morgan has a duty to act in the public’s interest, especially in matters concerning public health and safety. The Centers for Disease Control recommends that “If you or someone you know is having thoughts of suicide, contact the National Suicide Prevention Lifeline at 1-800-273-TALK (1-800-273-8255).”