Piers Morgan To Santorum: Would You Let Your Daughter Get An Abortion After Rape?

Piers To Santorum: Would You Let Your Daughter Get An Abortion After Rape? 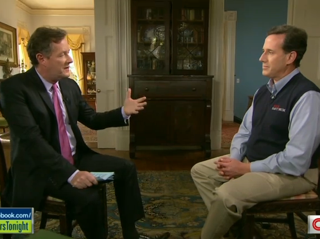 Piers Morgan admitted that it was an “impossibly hypothetical” question, but trudged on anyway, and asked Republican presidential candidate Rick Santorum as personal a question on the matter of abortion he could: if his daughter were raped, and “begged to have an abortion,” would his political principles win out? This was the most dramatic part of Morgan’s interview with Santorum last night, where he also challenged the candidate’s credentials on life by making him justify capital punishment.

Morgan first opened up the question by asking generally about Santorum’s stance on abortion, which he explained as a result of his deduction that the Constitution protects all people, and the unborn child was as much human life as someone born. “When I decided to run for public life, I was informed quickly people wanted to know what my position on that was, so I went through the process of better understanding the facts,” he explained, concluding that “to me, it was a pretty simple deduction to make that that’s what the Constitution intended to protect.”

Morgan then asked whether his strict anti-abortion policies would stand in the face of personal strife. “Do you believe that in every case it should be totally wrong?” he began, expanding, “you’ve got two daughters, if you had a daughter that came to you who had been raped, and was pregnant, and was begging you to have an abortion, would you then look her in the eye and say no, as a father?”

Santorum did not answer with a rigid “yes,” but instead said he “would do what every father would do is council your daughter to do the wright thing,” and explained that it was “not a religious matter” per se.” Morgan countered that there was a concern, especially by people who had gone through that situation, that “if I make her have this baby, isn’t it just going to ruin her life?” Santorum replied that “you could make the argument that if she doesn’t have this baby– if she kills her child– that too would ruin her life,” and that a baby, though “horribly created,” is still a “gift, in a very broken way.”

Morgan then shifted gears to capital punishment, asking Santorum to reconcile the two. “I’ve supported mandatory DNA testing, we have to be certain,” he answered, though Morgan insisted that, often, it is impossible to be so. Santorum insisted that “there are occasions where there is certainty” and “if there is not certainty, under the law it shouldn’t be used.”