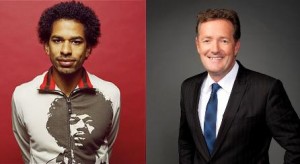 MSNBC contributor Touré slammed CNN’s Piers Morgan via Twitter starting last night, criticizing the Piers Morgan Tonight host’s interview with Robert Zimmerman, Jr., brother of Trayvon Martin killer George Zimmerman (who claims self-defense in the shooting). Morgan and Touré traded barbs on Twitter, until Morgan challenged Touré to come on his show to debate the topic. Alas, the invitation conflicts with Touré’s MSNBC schedule, so they had to work something else out.

“Piers did not challenge Robert Zimmerman the way a professional journalist should,”  tweeted during the broadcast, adding “@piersmorgan Allowing Rob Zimmerman to spout unchallenged lies further poisons a tense moment in American history. Be professional.”

Touré continued to slam Morgan’s interview, tweeting things like “Rob Zimmerman’s story makes no sense after video of George walking uninjured & unbloody thru Sandord PD,” and “If at a crucial moment in American history, ie now, you allow people on your show to spread misinfo & lies you are damaging America.”

“@piersmorgan Glad you’ve seen my George Plimpton show,” Touré said. “You should watch my interview show where I challenge people on bs when they spout it,” then explained Morgan’s reference by adding “On my show I’ll Try Anything Once I was a bull dodging rodeo clown & a skydiver & a sumo wrestler & a snake & bee wrangler & movie stuntman.”

Touré then zinged Piers for his own TV silliness, tweeting “Not sure what my hosting I’ll Try Anything Once has to do with anything when @piersmorgan was a pawn on Donald Trump’s show.#GlassHouses‘”

Morgan issued a rather narrow challenge. “OK @Toure – we’re on. Get to my CNN bureau in NY between 3-5pm ET and we will do this debate on air tonight. Deal?” Morgan tweeted, then goaded “Come on @Toure – everyone’s waiting. You man or mouse?”

Morgan taunted Toure awhile with Britishisms like “all mouth, no trousers,” while Toure pointed out that he was unavailable because he had to go to his, you know, job. Finally, Morgan asked “OK @Toure – when ARE you available? Stop the excuses & the bull…. – give me a day and let’s debate this on CNN,” to which Touré replied “Tuesday.”

Something must have happened to Morgan’s trousers (whatever that means), because he responded “Tuesday is Primary night @Toure – can do it Monday, Wednesday, Thursday, Friday.”

“Ugh. No can. Mon Fuse. Wed Iowa. Thrs St Louis. Fri MSNBC,” replied Touré, exposing the real weakness in the 21st Century’s new “booking by flame-war” procedures: you can’t really do both things well. “I’ll have Sheila call your booker…also YOU GOT PWNED!”

Touré added “If you knew me you’d know I’d love to do this. Will be valuable TV. (The you’re chicken ploy is lame. No one’s scared of you.)”

Such a debate would undoubtedly make for great television, but hopefully, the discussion would focus more on this galvanizing national tragedy, and less on the wounded egos and interviewing chops of various media figures.

Update: In a crackling Twitter exchange, Morgan and Touré came to terms, and the result will air tonight at 9 pm. The real-time Twitter booking (the first of its kind?):

Morgan: Hey @Toure – just saw you on MSNBC. We’re ten blocks away, come down for a REAL debate on my show. #CNN

Touré: I’m at CNN in the chair waiting. Why is @piersmorgan keeping me waiting? You won’t like me when I’m angry.

Oh, my God, Piers, the Tweet is coming from inside the house!