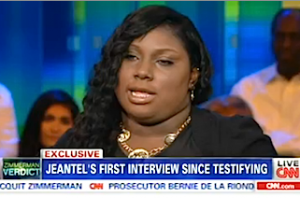 Piers Morgan followed Anderson Cooper‘s bombshell interview with an anonymous Zimmerman trial juror tonight with an exclusive chat with the witness everyone has been waiting to hear from since the verdict came down: Trayvon Martin‘s friend Rachel Jeantel.

Jeantel, who created a media firestorm with her highly-polarizing testimony towards the beginning of the trial, appeared on Piers Morgan Live alongside her attorney. She described her reaction to Zimmerman’s acquittal as “disappointed, upset and angry” and called the jury’s assessment of what happened “just B.S.”

Asked about what Trayvon Martin was like as a friend, Jeantel described him as a “calm, chill, loving person” and said she never saw him get “aggressive” or “lose his temper.” She said that the defense’s attempts to portray Martin as a “thug” were unfounded and defended his relatively mild drug use. “Weed don’t make him go crazy,” she said, “it just makes him go hungry.”

Jeantel also responded to the massive mockery she received in social media for the way she speaks, explaining that she was born with an under-bite that has made it difficult for her to speak clearly. When Morgan asked if she’d been bullied for her condition, she simply responded, “Look at me,” to laughter from the studio audience.

Morgan attempted to get Jeantel to offer her opinion of defense attorney Don West, who many claimed was condescending towards her when she was on the stand. Jeantel shook her head, declining to say anything bad about the man given her “Christian” upbringing.

Watch part 1 of Morgan’s interview below, via CNN:

In the second part of his interview with Jeantel, Morgan turned to the “creepy-ass cracker” comment she made and the major impact it had on the tenor of the case. She explained that the term is actually spelled “cracka” and defined it as “people who are acting like they’re police.” She said that if Zimmerman had calmly approached Martin and introduced himself, her friend would have politely said what he was doing there and nothing more would have happened.

Unlike the juror, Jeantel did think Zimmerman was racially motivated. “It was racial,” she said. “Let’s be honest, racial. If Trayvon was white and he had a hoodie on, would that happen?” She said she “had a feeling it was going to be not guilty” not because of the racial makeup of the jury, but because of the way the testimony went.

Jeantel insisted that Martin was “creeped out” and believed Zimmerman was following him, even worrying that he might be a “rapist.” She asked, “For every boy or every man who’s not that kind of way, seeing a grown man following them, would they be creeped out?”

Watch part 2 of Morgan’s interview below, via CNN: