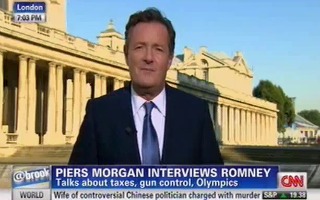 CNN host Piers Morgan appeared on his network with Brooke Baldwin on Thursday where he talked about his interview with Mitt and Ann Romney. Prior to playing clips of the interview, Morgan was asked about Romney’s comments to NBC where he wondered if London was up to the security challenges that the Olympics will pose. The comments drew sharp criticism from some members of the British press corps. But Morgan shocked when he defended Romney’s comments saying that the presumptive Republican nominee was “absolutely right” to question whether the U.K. was ready for the Olympics.

Baldwin asked Morgan for his thought on Romney saying that he found London’s lack of security preparation for the Olympics “disconcerting.” Morgan said he thought Romney was correct.

“It’s no secret over here that for the last three weeks the security around the Olympics has been a shambles,” said Morgan. “The outside firm they got in to run it has been all over the place – they didn’t have enough people and the army had to be drafted in. So, Mitt Romney was only saying exactly what has been happening.”

“He’s run an Olympics, so I thought he was perfectly entitled to be critical,” Morgan continued. He said that the English press jumped on him because they wanted Romney to “talk us up a bit,” but the substance of Romney’s critique was on point.

“I thought it was a bit of a fuss about nothing,” said Morgan. “He was just speaking the truth which can sometimes be rather unpalatable.”