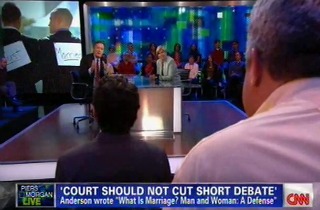 One of the wonderful things about print and online media is that those venues continue to be a places where ideas can be expressed freely and with a measure of depth. Online political commentary is a broad field in which talented opinion writers and journalists have the liberty to explore complex concepts for a captive audience. At times, a writer will touch on a bad idea, or a discriminatory or offensive idea; when that occurs, there is no shortage of capable opinion writers willing and able to call that individual out.

Often, that rebuke is thoughtful and cerebral, primarily because most avid consumers of online and print opinion demand that arguments and counterarguments be supported by facts and data. It is when an opinion writer relies on their “gut feeling” that they expose themselves to deserved criticism when they’re gut turns out to be a poor forecaster of future events. Though it often struggles to remain profitable, print and online commentary is a vibrant marketplace of rather deliberative thought. The same cannot be said of much of the cable news landscape. Take, for example, CNN host Piers Morgan who exhibits an instinct prevalent among many who are actively trying to rethink the approach cable news takes to audience retention – that emotion is a sufficient substitute for depth of knowledge when tackling the controversial subject of the moment.

For months, Morgan relied primarily on the force of his indignation in order to advance the idea that new gun control measures were critical in the wake of the Newtown massacre. Today, with the nation turning its attention to other matters, Moran has begun – ever so incrementally – to move on to other topics with more relevance.

On Tuesday, the subject of discussion on Morgan’s show were the arguments made before the Supreme Court as the Justices weigh the constitutionality of state-level bans on same-sex marriage. Morgan’s guests were financial expert Suze Orman, who is a lesbian, and The Heritage Foundation’s William E. Simon Fellow in Religion and a Free Society, Ryan Anderson.

Anderson, an individual who has regularly waded into exceptionally hostile territory to advance what he considers a scholarly argument against gay marriage – a position few in the media, including myself, agree with – has more courage than just about any pundit I can name. He has offered himself up to the most antagonistic venues to serve as a punching bag for aggrieved hosts and guests. He should be afforded equal standing when he allows cable news hosts the privilege of being able to advance their agendas by using him as a foil.

Morgan and his producers, evidently, do not share that opinion. On Tuesday night, seated on a central stage in-the-round, Morgan and Orman berated Anderson, who was granted merely an ignoble place in the audience. Though Anderson dominated the segment, he was deemed unfit to share the stage with the righteously pro-gay marriage host and guest.

Furthermore, Anderson is forced – given the unpopular position he is tasked with defending – to advance his arguments calmly and with much deference as possible. He also appears to want to buttress his position with all the facts an anti-gay marriage argument has available. Morgan, meanwhile, who has mountains of substance available to him to support a pro-gay marriage argument, choses to eschew an evidence-based argument in favor of moral preening. Thankfully for him, Morgan performs his hosting duties before a live studio audience. Without these supportive voices, his arguments would lose a lot of its presumed poignancy without the chorus of applause he regularly receives after accusing his opposition of base motives.

Take for example the following moralizations that Morgan relies on in lieu of an argument:

“Do you understand why I feel – especially with Suze sitting here, an incurably successful American business icon, who has been in a 12 year relationship with a woman she loves very deeply – I find it extraordinary that you, as a fellow American, would be quite happy to see a prisoner’s rights upheld to get married. And you would be quite happy to have a principle which says it’s about procreation, even if people are 60 or 70-years-old and can’t procreate if they’re women, but you don’t want Suze to have the right to marry the woman she loves,” Morgan continued. “I want you to explain to her what’s wrong with her?”

“I just find it odd that you want a certain right to you but, you don’t want to afford it to someone like Suze,” Morgan said, rephrasing the same question yet again.

“I feel compassion for you,” Orman said finally. She proceeded to accuse Anderson of being unclear on the facts on the issue of gay marriage. Orman, an accomplished financial expert and broadcaster, could have educated him on those facts. Instead, she made the mistake of calling Anderson ignorant and ceding the moral high ground to him – high ground which Anderson promptly exploited for all it was worth.

Again, in this author’s opinion, the intellectual underpinnings of Anderson’s argument against gay marriage are especially frail. Morgan probably could, if he chose, dissect and dismantle Anderson’s argument with facts of his own. Orman most certainly could have. Neither chose to, however, because they were content to express their feelings on the matter, and the audience ate it up. Why would either rely on a dispassionate argument in favor of gay marriage when the audience rewards them so for merely expressing their feelings?

There is a deeply fulfilling and powerful intellectual debate ongoing in the print and online community about gay marriage today, just as there is regarding nearly every contentious issue of the day. Readers of this post are probably aware of that, and are likely to be voracious consumers of that debate. The viewers of programs like Morgan’s are, sadly, cheated out of that experience. One would hope that Morgan thinks highly enough of his own audience to treat them to an educated discussion on the issues at hand, rather than to rely solely on the self-evident high regard he has for his opinion.