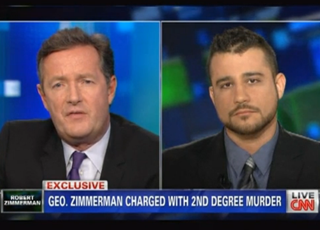 George Zimmerman, the man who shot Trayvon Martin, is now officially charged and behind bars. Piers Morgan received the first reaction from family– his brother Robert Zimmerman— who expressed some relief in George Zimmerman being in a place where police will protect him from attack, but arguing the “most courageous” decision for the prosecutor would have been not to convict.

“We are devastated,” Robert Zimmerman told Morgan, explaining, “I’m not the only family member, George has tons of family members who want to speak out. But I am the only one that can.” He emphasized “there were no winners in this already,” but he did think “the only silver lining is that my brother is safe” under custody. Asked whether this was “the worst case scenario for you,” Robert Zimmerman clarified that “we are a family that respects the system” and they hope to see justice. He suggested the prosecution threw the book at his brother perhaps hoping for a plea deal– a “shot in the dark tactic”– and argued that, instead, “the most courageous tactic would have been to say ‘we are not prosecuting and here is why.'”

In the second half of the interview, Morgan began to ask about the facts of the case, making the interview much more contentious. Robert Zimmerman took exception with the idea that his brother followed Martin. “It’s inappropriate for anyone to say, including me, to say for certain that he was followed,” he said, instead arguing “he lost sight of Mr. Martin– he did not ever follow, confront, or catch up to Trayvon.” Morgan pushed on this issue, asking him to tell the side of his story that his brother had relayed. Morgan also played and repeatedly brought up the video of Zimmerman at the Police Department, where he appeared to walk and have no abundantly visible injuries. Zimmerman continued to explain that George Zimmerman had a “6’2 person on top of you, you’re becoming unconscious… you don’t know if this person is going to kill you or not, but if you’re wrong, you’re dead.”

The interview via CNN below in two parts.