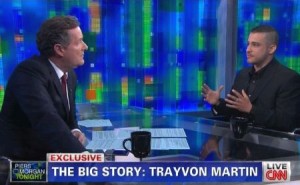 On Thursday, Robert Zimmerman, brother of George Zimmerman, spoke — for the first time — on Piers Morgan Tonight. Defending his brother’s involvement in the Trayvon Martin case, Zimmerman said his brother would have been dead had he not acted — and that the “pulled out a gun and shot him” narrative is simply not true.

“Why are you here?” Morgan asked.

Zimmerman replied: “I think the tide has turned. There’s a lot of loose ends to this story, some of them have to do with the events of that night and the investigation. Some of them have moved on to a lot of hate speech, people like the McClain family having to flee their home, people putting emotions ahead of fact, and putting our family, and other families, in danger.”

He confirmed the family has received death threats, and that he himself was “contacted by law enforcement too because there was credible intelligence that could have threatened me.” Zimmerman continued:

It is a mythology that’s been built up. … it’s not because [George] doesn’t have supporters, it’s because people who love and support George, his family name, also support the system, the judicial system and the legal system, that we have in America.

Morgan then went on to ask him about his brother’s character. Zimmerman said George “is the neighbor that everybody would want to have, he’s the kind of guy that sees somebody struggling with changing a tire and stops to help them. Or helps older people with their groceries. He goes out of his way to help people and he always has.”

Playing devil’s advocate, Morgan said viewers might then ask why such a kind person would “get into some kind of altercation” with a young boy.

Zimmerman said he heard from his brother within 24 hours of the incident and the idea that he chased Martin is “absolutely false.” Morgan countered, saying the 911 call shows him saying he wants to pursue Martin, and is told not to. But then he “says okay,” Zimmerman said. “And anything past that is conjecture by the media.”

Morgan played the call and asked how Zimmerman knows George stopped following Martin. He said it’s in the police reported, to which Morgan quickly added, the police report is based off what George told the police.

Zimmerman said if Martin was allegedly close to his home, and was being pursued, “I don’t know how he couldn’t make it home.” Martin “somehow snuck up on him,” he said. Furthermore, he said George was reaching for his cell phone to say the person he stopped following had confronted him, but he “never got to make that call” because Martin attacked him.

Regarding the new video, Zimmerman said some injuries take 24 or 36 hours to “show the bruising,” and sometimes when the nose breaks, blood is swallowed. “We’re confident the medical records are going to explain all of George’s medical history,” he said.

George “has very severe emotional injuries,” he said. “He didn’t call his family and express anything but sadness […] he had changed, he wasn’t the same […] he was very disappointed that none of the neighbors had come out and helped.”

Also claiming self-defense, he said George “prevented his firearm from being taken from him and used against him, and that’s called saving your life.” It “would have been George dead had he not acted decisively and instantaneously,” he said.

The scream on the 911 call, he said, was George. But he didn’t blame Martin’s family for believing it’s Martin’s voice. Nonetheless, he insisted it’s George. Despite those screams, he said it was sad that no one came to help. If someone had come out, the situation potentially could have been avoided, Zimmerman said.

“It sounds just like my voice,” he added. And said technology would sort it out.

Regarding the possible racial slur, he said George could have said anything, noting that he speaks two languages fluently. And said that specific audio is not in the original 911 tape. A point which Morgan said is factually incorrect. Zimmerman said he didn’t believe they’re words, but rather, utterances under his breath. Morgan pressed further, but Zimmerman didn’t budge.

Morgan said a slur would add a racial element. The “whole hoodie thing,” Zimmerman said, is not what caused this.

Going further, he said George found Martin suspicious in context of what was going on in the neighborhood.

Morgan went on to ask if George had ever lied to Zimmerman, to which he responded, “not to my knowledge.” He’s the most honest brother, he said.

Asked what he’d say to Martin’s family, Zimmerman said, “This is a tragedy, her son was lost. I feel very badly about that. And I want, in the end, not for her son’s memory to be seen as how we degraded our system and turned into mob rule, and went into a hate speech, carnival of hatred.”