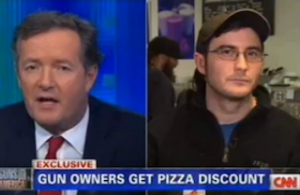 A pizzeria owner from Virginia Beach recently injected himself into the national conversation on guns by offering a 15% discount to anyone who entered his shop carrying a gun. Tuesday night, that young man, Jay Laze, found himself on the wrong side of Piers Morgan‘s outrage on CNN.

Morgan explained the story before his via-satellite interview with Laze, saying, “not surprisingly, I’m not a huge fan of this idea” and asking the man behind it to “explain to me why this is not as dumb as I think it is.”

Laze proceeded to explain to Morgan that having so many people with guns in his store, and given the apparent success of the promotion there are a lot them, makes him feel safer in the event that a criminal tries to “do anything funny.” Asked how he knows the people taking advantage of his discount aren’t mentally ill or criminals, Laze simply said “because they can walk in on their own two feet and drove here.”

Morgan had trouble seeing eye-to-eye with Laze on a variety of gun-related issues. Laze argued that President Obama is trying to force Americans to register their guns so the government can take them away but couldn’t point to any specific examples of people he knows whose guns have been confiscated. He also argued that the United Nations posed the biggest threat to American citizens who must be properly armed to prevent against an attack from that organization.

Realizing that they weren’t going to agree on the gun issues, Morgan turned to “the profits you’re making from this extremely cynical commercial exercise involving armed people who you have no idea who they are coming to your restaurant,” asking, “that’s why you’re doing it, to make money, isn’t it?”

After Laze admitted that he is using the promotion to make money so he can dedicate his work “to society” later in life, Morgan began to tear into him for actively making his restaurant, and by extension the country, a more dangerous place by encouraging more people to carry guns. He closed the segment with a searing monologue against everything that he felt is wrong with Laze’s plan:

“You’re encouraging all these people who may or may not be criminals or mentally insane people armed to the teeth with weapons, the likelihood of there being an accident in your place or somebody doing something stupid has massively increased. Instead of making your restaurant safer going from zero shootings, you’ve increased the risk of a shooting. That’s why I called you an idiot the other night. It’s an idiotic premise to work off… That’s exactly the kind of attitude that is unfortunately causing America, the most hideous gun violence problems. Mr Laze, good luck with your promotion. I hope it fails spectacularly.”

In the end, the inexperienced debater Laze was no match for a fired-up Piers Morgan, who’s had ample practice on this subject over the last few months, taking on gun rights enthusiasts like Alex Jones and Ted Nugent.

But Laze has evidently tapped into something in his Virginia Beach community, where his customers are eager to get some reward for flaunting the privileges their Second Amendment right still affords them, even if it is just 15% off a pizza.