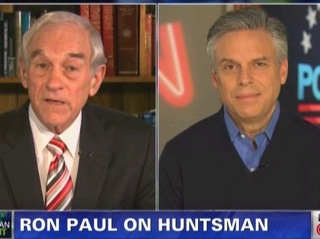 The night after Iowa has been spent on cable news mostly interviewing candidates about their results there, and probing them on problematic issues. Piers Morgan opened his program tonight with a chat with Rep. Ron Paul, in which he asked the candidate to assess his performance and challenged him on his weaknesses. He also brought up a gaffe from earlier in the week– a mocking tweet at Jon Huntsman Rep. Paul claimed not to know about, and scolded Rep. Paul for being uninformed about it– as Huntsman himself looked on.

Morgan spoke to Rep. Paul for two segments– the first mostly concerned with why Rep. Paul connects with young people and on his individual policies. Morgan was a bit more aggressive during the second segment, which opened with Morgan asking how Rep. Paul would react to the fact that “your opponents always present you as someone crazy.” “I get a charge out of this when they say these views are extreme,” Rep. Paul noted, explaining that “what really counts are the issues and what you believe in,” and that age didn’t matter as “I have young ideas and I’m in good health.”

Morgan then turned to the tweet in question, asking Rep. Paul whether he had any comment: “Do you want to apologize?” Rep. Paul responded by saying that “it was supposed to be a little high-spirited and funny, but it turned out to be a national incident,” and that it was his staff that thought it was a good idea. As he began explaining what happened, unbeknowst to him, Huntsman himself appeared on the screen waiting for his interview, listening to Rep. Paul. Morgan eventually let Rep. Paul know that Huntsman was on the line, as the Congressman continued to explain. “I thought he was a nice guy he had some nice ideas!” Rep. Paul explained.

Morgan then gave the Congressman a bit of unsolicited advice: “I would urge a little caution… [there now is] a pattern of you being completely unaware of what your staff are doing half the time.” Rep. Paul responded that it wasn’t “half the time,” and that “it was meant to be in good humor,” though he told his staff that it “isn’t very funny” for them to do something that causes the candidate to be caught flat-footed on national television. On the other screen, Jon Huntsman smiled.