Piers Morgan, Nancy Grace Flip Out over Zimmerman Calling Himself a ‘Victim’ 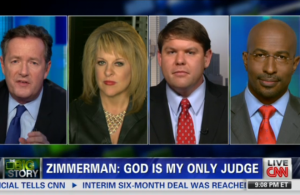 Piers Morgan, Nancy Grace, Van Jones, and Ben Ferguson clashed Monday night over George Zimmerman and a new interview with CNN in which Zimmerman called himself a “victim” and said his life would have been much easier had he stayed home on that fateful night.

And on that point, all four were in agreement: Zimmerman has absolutely no standing to call himself a “victim.” At all. Ferguson called Zimmerman “a victim of his own stupidity,” if anything, while Morgan brought up a Twitter exchange he had with Zimmerman, in which he outright called Zimmerman a “killer.”

Grace was bewildered at how religious Zimmerman acts now, asking “Did he find God after he shot Trayvon Martin?” She agreed with Morgan on labeling Zimmerman a killer, but Ferguson pushed back, saying it was legally found to be self-defense. They tussled for a bit, and Ferguson told Grace, “Thank goodness you weren’t on that jury, because they looked at the facts and you don’t want to deal with the fact that there was a struggle and a fight!”

Grace shot back, “Are you in a court of law? You’re in a TV studio!… We can tell the truth!”

Jones also pointed out that if Zimmerman doesn’t really like the attention, he has a funny way of showing it, because “he’s now just jumping into the media for no reason at all.”