Piers Morgan On Gun Laws: Assault Weapons Not What Founders Had In Mind With 2nd Amendment 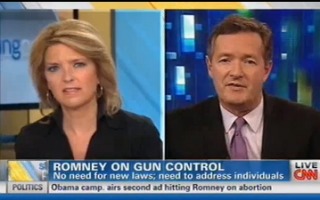 RELATED: Piers Morgan Grills Romney On Gun Control: ‘What Does It Take To Change The Gun Culture?’

Morgan pointed to Japan as the nation with the “most stringent gun control of any country of the rich, so-called civilized countries of the world,” and one with “very little gun crime.” Compare this, he continued, to the U.S., which “now has as many guns as it is has people,” and has something between 10,000 and 12,000 gun murders a year.

Panelist Will Cain then added that “the key distinction in what Piers just talked about is this not japan. This is the United States of America, and we have a constitutional right embedded in the second amendment. That is a big threshold you must pass. When you ask yourself do you make sweeping laws to create for situations that you can hopefully keep deviants from acting on, you have to balance that against what we have as a constitutional right.”

“Will, I hear you,” said Morgan. “But let’s put one thing on the table here. If that is the case, why did Mitt Romney ban these type of assault weapons when he was governor of Massachusetts? What makes them more dangerous in Massachusetts than the wider America? And in the end, what does any American civilian need with an assault weapon and a magazine gun that can fire off 100 bullets in one minute?”

“My point of debate with you is not to defend Mitt Romney,” Cain clarified. “It’s rather to debate the assertion you make that these laws are so necessary.”

“I totally respect the right to bear arms,” Morgan said later on in the segment. “I just dispute that when the founding fathers wrote the constitution originally, when they did this, they did not imagine that a disturbed young man would be able to buy a high-powered assault weapon or thousands of rounds of ammunition on the internet. These things never entered their heads. They were talking about the musket era.”