Piers Morgan Panel Tears Into Claim Irene Was Overhyped: ‘How Many Have To Be Killed?’ 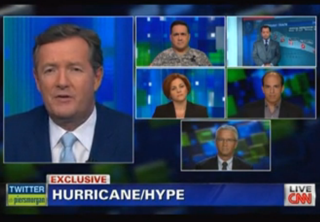 In the aftermath of Hurricane Irene, which devastated much of the Northeast (though not exactly where predicted), the media woke up to a debate on whether the entire threat was more bark than bite. On tonight’s program, Piers Morgan and a panel that included New York Times reporter Brian Stelter and meteorologist Chad Meyers challenged Washington Times reporter Joseph Curl to defend his claim that the devastation wasn’t enough against damage statistics.

Morgan began with Stelter, who had been out in the hurricane to cover the event for the NYT, who argued off the bat that, from his vantage point, “the idea that it was hyped just seems ludicrous to me.” Curl countered that “three days straight of wall-to-wall coverage” seemed excessive, and likely had to do with the fact that New York City was on the hurricane’s path. Morgan then replied that “the devastation to life, limb… would have been horrendous” had it done the damage predicted in New York because of the dense population, adding dramatically, “how many have to be killed for you to assess this as serious enough?”

Curl responded that that was “not what I’m saying” and respected the damage, but noted that some of the worst damage was in Vermont, not New York City, but “I never heard Vermont mentioned once.” While Stelter agreed that “the media was late to find out about the flooding” because it was “too focused on the coast,” he attributed the problem to a lack of trained scientists on television, for which he tipped his hat to Chad Meyers. Meyers, on his part, listed every recent hurricane with the same amount of pressure to prove how rare they were and why he was worried. As to the claim that meterologists were “telling us it was going to be devastating along the coast” and not inland, as Curl argued, Meyers angrily interjected “that’s not true!” and reminded Curl that 72 hours before landfall, “I said ‘this is going to be remembered as a floodmaker.”