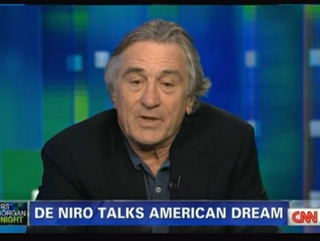 As Piers Morgan noted towards the end of his chat, Robert De Niro isn’t particularly fond of interviews. Nonetheless, De Niro sat with Morgan and answered a range of questions about all sorts of topics: America’s economic future, how to pull it together, the Buffett Rule, Trayvon Martin, and his favorite living actors. De Niro seemed optimistic for the nation, but hoped the divisiveness in political talk would not diminish the optimism of the nation.

RELATED: Piers Morgan Takes On Gingrich: Are You Being ‘Overly Pious’ About Robert De Niro’s Joke?

“What does America have to do collectively similarly to how New York came together [in the aftermath of 9/11]?” Morgan asked De Niro and Jane Rosenthal, that latter which answered that often, “artists can make more sense of the world than politicians can,” and can help Americans heal. De Niro noted that it appeared “we went down a bad path with all this home mortgage situation, and people, in my eyes, being taken advantage of.” Politicians, he argued, didn’t help, “with all this divisiveness, what’s going on with people wanting to get elected, it’s taking us off the right track.” He decried the “preposterous things being said by the Republicans especially.” He didn’t exclusively blame them, saying “we know it all sort of feeds off of each other with the media… it’s like watching people fight, they’re both nuts.”

De Niro “absolutely” supported the Buffett rule, and noted that he considered himself “very, very lucky in life– I’m just lucky, period.” When asked if he would pay more taxes, he said yes, but “I already pay a lot of taxes,” and “with Romney, the taxes he pays are astounding.”

Morgan also asked about the Trayvon Martin case, which De Niro called “awful,” but noted that, Stand Your Ground law aside, “without law, we have anarchy, we have chaos– so we need law.” He noted that the police were the last line of defense for those in danger, and he always found it strange that people would complain about the officers themselves.

As for his favorite living actors? De Niro names Leonardo Di Caprio, Matt Damon, and Sean Penn, and laughed when he realized he called Penn a “young actor.”