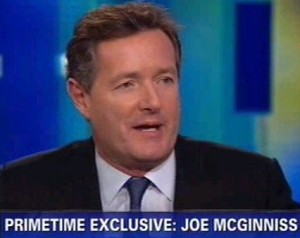 It’s been a long week for The Rogue author Joe McGinniss as he has toured the media in anticipation of the release of his Sarah Palin biography. But he began this one with one of the harder interviews he has encountered yet– with Piers Morgan, who questioned his foray into the “tabloid mire” and asked directly whether his methods in writing the book weren’t borderline “creepy.”

McGinniss didn’t seem to have much of an answer for the first question he received– whether he “liked” Palin– instead arguing, “I’ve never met the person, so whether or not I like her is not the point.” The point, he continued, “is how far she’s gotten in American politics under an image and a personal that is entirely fake.” To that end, the way that McGinniss argues he exposed that image, Morgan asked, had gotten him in trouble: “the criticism against you on this occasion is that you dipped into the tabloid mire a little too much.” Morgan also later noted that the race angle to the most talked-about story in the book– Palin’s alleged tryst with NBA star Glen Rice— sounded a bit like an “old tabloid trick” where one asks a celebrity if they are gay, and when they say no, “they are denying being gay.”

McGinniss, on his end, called his scoops “supposedly salacious” and disputed the claim that his book had any tabloid elements to it. He argued “the Palins have intimidated so many people for so long in the Wasilla area that it’s really hard to find people to talk about them,” hence the anonymous sources, and that he received many death threats. As for the tabloid claims, “this is what happens when the National Enquirer steals a copy of your book,” he lamented. He added that Rice himself “had only good things to say about her,” that their relationship was “not tawdry,” and that he actually found the anecdote rather sweet.

They also sparred on the scandal involving the writing of the book itself, which Palin found objectionable as she had to share a fence with McGinniss. The author argued it was a “non-issue from the start,” which Morgan continued to challenge.