Piers Morgan Revisits Personal Wealth With Michael Moore, Presses Him On Net Worth 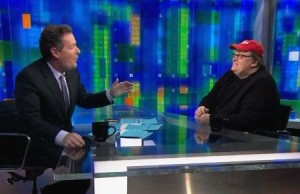 The last time Michael Moore visited Piers Morgan to discuss the Occupy movement, Moore got into a tense conversation with the host about whether he was or was not a member of the 1% wealthiest in the country. Moore agreed to return to the show and talk income inequality and, naturally, the topic surfaced once again. This time, Moore agreed that some of the time, “I would be in the 1%.”

RELATED: Michael Moore Refuses To Admit He Is Part Of The 1% To Piers Morgan

Morgan noted that the issue “became a big thing” last time Moore was on the show, and “you looked like you were wriggling a bit.” Moore explained that any wriggling had to do with the portrayal of himself on the right. “I think Republicans and right-wingers blow me up into this mythical scary character,” one that used his money to influence politics heavily. Morgan asked him directly, however, how much money he believed his movies grossed, to which Moore replied, $500,000,000. “You’ve either got the worst agent,” Morgan responded, “or you must’ve made millions.”

“It’s true!” Moore responded, arguing that “Bowling for Columbine not only did I not make money, I didn’t make a paycheck.” Morgan didn’t let him get away with that, however, and insisted that Moore had “made millions of dollars,” to which finally Moore responded, “yes, for three or four good years… in those years, I would be in the 1%. Most years, no.” He also took the moment to explain that the antagonism towards the 1% was not universal or based on how much money one had, but on the lack of compassion to the less well-off. “Anybody who does well, who wants to raise their taxes and make sure those suffering now, are making a better life.”