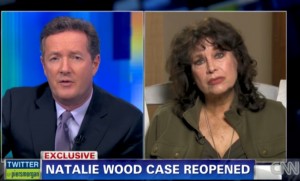 On Friday, the Los Angeles County Sheriff’s Department announced that they would be re-opening the investigation into actress Natalie Wood‘s death. Wood was 43 at the time of her death, on Nov. 29, 1981. Her body was found in the ocean, off the coast of Catalina Island, and police ruled her death an accidental drowning. She had supposedly fallen off a yacht. However, the case has long been suspected as having involved some sort of foul play.

Making things even stranger was the Christopher Walken element — the actor was also on the yacht, and is believed to be one of the last people to see Wood alive. Also on the boat was Robert Wagner, Wood’s husband, who allegedly got into a heated argument with Wood before she disappeared. The captain of the boat, Dennis Davern, wrote a book in 2009 and has been vocal in his accusations of Wagner being the murderer. Authorities have said that neither Walken nor Wagner are suspects, and that — until new evidence pops up — the death is still being ruled as an accident.

In a huge understatement, Piers Morgan — during his interview with Natalie’s sister, Lana Wood (which will air on CNN tonight at 9 p.m.) — says that it, “remains a very confusing picture.”

Trying to straighten things out, at least a little bit, Lana Wood told Morgan that Davern used to call her “quite frequently” in the early 90s, crying, saying that there was more to the story than he said, and how guilty he felt. “I always told him at the time, ‘Go to the authorities, then,'” she tells Morgan. Davern would explain that he couldn’t because he was scared. “I think what’s important is not what I think happened or someone else thinks happened,” Wood concludes. “I think what’s important is to get to the bottom of what actually did happen.”

Watch the preview clip of Morgan’s interview with Wood, courtesy of CNN, here: