Piers Morgan Spars With Jon Lovitz Over His Anti-Obama Rant 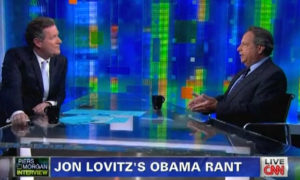 Jon Lovitz recently caused a stir with his profanity-laced remarks about President Obama. On Tuesday night, Piers Morgan sat down with Lovitz to discuss it. Recalling how he “believed” in Obama, Lovitz expressed how he’s grown to take issue with how the president is framing what some call “class warfare.”

Morgan started off by playing a clip of the remarks in question:

“This whole thing with Obama saying the rich don’t pay their taxes is fucking bullshit. And I voted for the guy and I’m a Democrat. What a fucking asshole.

“The rich don’t pay their taxes? Let me tell you something, right. First they tell you — you’re dead broke — this is the United States of America, you can do anything you want, go for it. So then you go for it, and then you make it, and everyone’s like, fuck you.”

“It’s a comedy club, there’s no language restrictions,” Lovitz said. Asked if he meant what he said, without the profanity, Lovitz said, “Yes, I did mean what I said.”

He added, “I believed in him, I agreed with everything he was saying when he ran for president, I was listening to what he said, I thought this guy thinks like me and I agree with him. And now he’s changing.”

Now, he said, all Obama says is that millionaires and billionaires don’t pay their fair share. Morgan asked why the 1 percent shouldn’t pay a bit more in “times of great economic crisis,” and Lovitz replied, “I don’t agree with that.” Morgan asked whether he thought Wall Street was responsible for the economic meltdown. Lovitz said, “Maybe some of it, but not all of it. Some people they got housing loans, I think they’re responsible for taking a loan they didn’t qualify for.”

Morgan argued that those who took loans weren’t as well-versed in the issue as those who gave them out, and the two disagreed back and forth on the topic.

Lovitz said, “This whole idea of this 1% versus the 99%, it’s a false static.” Nobody who is wealthy “saying let’s go get the people that aren’t,” he said, adding that Obama’s “creating a false class warfare.” He said he knows what it’s like to be “dead broke,” and does sympathize with those struggling, but argued it’s not the fault of the 1 percent. The economy’s bad for everybody, he said.

Furthermore, Lovitz said Obama’s hypocritical because he’s in the 1 percent. Morgan insisted that it’s not a bad idea for those who have more to help a little bit more. Lovitz conceded that’s fine, but countered that that’s not the way the president is framing it.