Piers Morgan Tears Into Obama’s ‘Crumbling’ Promises Of Transparency: America ‘At Its Worst’ 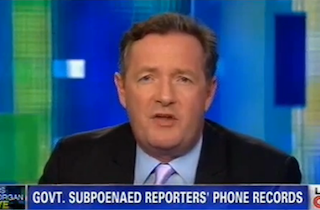 Piers Morgan was not pleased with President Obama on Monday night, particularly in light of the news about the Justice Department seizing the Associated Press’ phone records over a two-month period. This is exactly what the president promised he wouldn’t do, Morgan recalled — and it’s a blatant attack on the country’s free press.

Morgan juxtaposed the administration’s current scandal with a clip in which Obama said transparency would be “touchstone” of his administration. That “whole transparency thing” now is “crumbling,” Morgan noted, citing a laundry list of evidence: Guantanamo Bay, Benghazi, the IRS, and the Justice Department vs. Associated Press.

Constitutional and First Amendment attorney Floyd Abrams argued that the AP issue is less about transparency and more about the First Amendment and civil liberties. These issues raise questions about “candor,” he added — “there’s no denying it.”

While it’s possible the situation involving the AP may have broken the law, Abrams said he doubted that was the case. Generally before going after records, though, he said “they’re supposed to negotiate” and talk to the journalists, which didn’t happen here (the exception being that the communication would intrude on the investigation).

Morgan found the whole ordeal “completely outrageous,” raising the issue of protecting sources. “They’ve been rewarded for this responsible journalism by being kicked in the teeth,” he observed. Abrams further commented on the breadth of the acquired phone records, lamenting it’s “not America at its best.”

“No, that’s at its worst,” Morgan replied, noting it wouldn’t surprise him if they bugged the journalists. He and Abrams agreed that this was a true attack on the freedom of the press, with Abrams adding that every word of the letter the AP sent in its response was true.

“This is the sort of stuff, really, that if some foreign country did, the State Department would complain about,” he asserted, “on grounds of interference with human rights.”