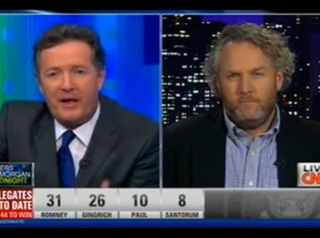 Andrew Breitbart and Piers Morgan have made up since the time Morgan joked the former was “evil.” Not that he didn’t joke about it last night, but with that tension out of the way, the two– and a panel including Amy Holmes and Michael Reagan got to the business of just how conservatives could like Newt Gingrich again, of all people, and came to a strong conclusion: conservatives want someone to defend them from the mainstream media.

You’re looking a lot less evil than the other night which is a good start to the proceedings,” Morgan teased Breitbart, before asking to explain whether Gingrich’s attack on John King was a “turning point in dealing with that kind of baggage.” “Any candidate that attacks the mainstream media immediately gains 20 points among conservatives,” Breitbart explained, which is why people like Donald Trump are received warmly. “The people of South Carolina have been attacked mercilessly… by the mainstream media,” he continued, and wanted to be defended since they saw the double standard in the treatment of Gingrich versus the treatment of, for example, John Edwards in 2008.

The panel agreed, with Holmes arguing– to Morgan’s disagreement– that the John King moment was one in which the media the their narrative “thrown back in their face” (Morgan countered King did a “great job” in helping Gingrich “feign outrage,” as well as in asking it so crispily in general). Reagan ads that this contrast is strongest vis a vis Mitt Romney, and can best be described as a Reagan Republican vs. Rockefeller Republican dispute.

The segment ends with Morgan happily noting that Breitbart and himself “patched things up” since the whole “notoriously evil” misunderstanding, which is very good news for anyone who enjoys good TV. Not that the segment is without controversy– at least some on the internet have highlighted the unfortunate positioning of Morgan’s middle finger at the 1:54 mark as a sign of further dispute (we’ll let you commenters reach your own verdict on that).