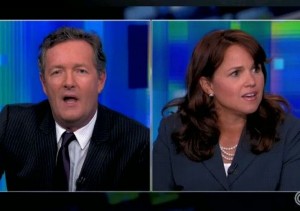 In the wake of her walk-off on Piers Morgan Tonight, former GOP Senate candidate Christine O’Donnell (R-DE) has waged an escalating campaign to paint host Piers Morgan as a sexual predator, calling his line of questioning “creepy,” and accusing him of “borderline sexual harassment.”

While interviewers have challenged O’Donnell over her reasons for ending the interview, there’s been little pushback over her increasingly hyperbolic attacks on Morgan.

Guthrie did a good job of challenging the factual contradictions in O’Donnell’s explanation, such as the fact that Morgan’s questions were based on things that O’Donnell wrote about in the book she’s trying to promote, or the fact that O’Donnell didn’t walk out until much later, but neither Guthrie nor Chenevy raised so much as an eyebrow over the sexual predator innuendo. Sexual harassment is a real thing, a horrible thing, and equating sexual coercion with asking someone about the comments that made her famous, that she wrote about in her book, is trivializing and sick.

O’Donnell also was given ample time to speak about other issues, and made some excellent points about her treatment at the hands of her fellow Republicans.

I asked Piers Morgan about O’Donnell’s comments, and he replied, in an email, “I would say that her comments are ‘borderline actionable.’  Would she say this if a female journalist had asked the perfectly legitimate questions?”

It also appears that her character assassination of Morgan is completely unnecessary, since in both interviews, she eventually chalks the walkout up to time constraints. Calling Piers Morgan a creepy, borderline sexual predator appears to be an end unto itself, and a misguided one.

O’Donnell’s current book tour illustrates another insidious issue that’s getting little attention, which is the creeping influence of publicists. Any reporter will tell you that PR people always try to influence how their charges are portrayed (that’s their job, after all), but increasingly, they see themselves as other people’s news editors. This is usually invisible to news consumers, as negotiations about interview ground rules are normally off-the-record, but in O’Donnell’s case, she came right out and gave Morgan editorial notes during the interview, and her publicity staff blocked the camera, and also ended a later radio interview.

There are certain compromises that journalists make in order to gain access to public figures (on-camera vs. print, reference audio vs. pen and pad, Q&A format vs. narrative), and while those figures often need the publicity, the balance has shifted too far to the access side of the equation when their publicists think they have the right to dictate what questions are asked.