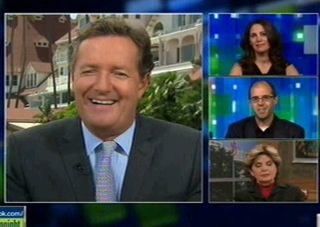 Piers Morgan isn’t making any qualms about the fact that his aborted interview with Christine O’Donnell has left a mark. In fact, he dedicated an entire segment of his program last night to understanding what had happened and, more importantly, whether he himself was sexist. Fortunately for Morgan, his panel– attorney Gloria Allred, Mediaite Editor-At-Large Rachel Sklar, and Time‘s James Poniewozik— seemed to agree that, for once, this wasn’t his fault.

Morgan took turns asking the panel whether O’Donnell was correct in walking out of his interview after questions about gay marriage, and later accusing him of sexual harassment. Sklar, who got the first shot at answering, assured Morgan that he was “definitely not guilty,” and that O’Donnell was merely concerned that answering the question would have “engaged actual policy.” More importantly, she later added that it was an example of the impact Sarah Palin‘s attitude towards the media had had on some on the right, who choose to antagonize in a blatant way.

Poniewozik agreed that no sexism was involved, but was adamant in highlighting the fact that Morgan was not exactly a victim by any means, given that he was just hosting a segment entirely about his own persona. “Under those circumstances,” Morgan retorted, “I’ve got no choice but to respond and defend my honor!” He then turned to Allred, who he noted was particularly quiet, and asked, “Did I breach her civil rights? Was I a sexist pig?”

“Not guilty!” Allred assured him, adding that her claims were “nonsense” and made her “angry” because it trivialized the meaning of sexual harassment so that when real victims of it protested, they were ignored. Morgan repeated a claim he made to Mediaite earlier in the week at that, that such slander was “borderline actionable,” which once again prompted Poniewozik to jump in. “This isn’t quite a Nixon/Frost moment,” he joked, noting again that it worked out in “Piers’ and CNN’s benefit.” Morgan ceded the point as a final one, ending the segment saying, “I will plead guilty to the fact that this has been very good for me, for my show, for ratings, and if there are any other politicians who want to come on and walk out in ridiculous circumstances such as these, I’m your man… long may we all be talking about me.”