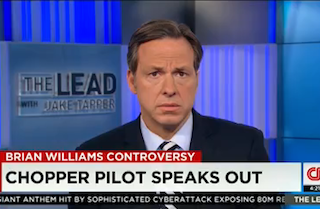 After speaking to CNN for an online article earlier in the day, helicopter pilot Rich Krell confirmed in an interview with The Lead’s Jake Tapper Thursday afternoon that the chopper carrying Brian Williams in 2003 did take enemy fire as the NBC News anchor has said in the past. The only part of Williams’ story that was false, according to Krell, is the suggestion that his chopper was hit by an RPG.

Explaining that he was piloting the Chinook helicopter following closely behind the one that was struck by an RPG, Krell said that his chopper “took small arms fire” in the attack. He said Williams “would have been aware of it because of the activity of the crew and the door gunners were returning fire” and said the small arms fire only creating some minor damage to the helicopter.

Leaving the RPG question aside, Tapper asked if Krell took issue with other parts of the story Williams has been telling for years, “that the helicopter took small arms fire and that he was scared.”

“Well, no, we were all scared. That’s the truth,” the pilot responded. He said could understand why members of the crew of the chopper that was struck by an RPG do “take issue” with Williams’ accounts. “I don’t think it was anything derogatory towards them,” he said. “I agree he needs to apologize and get the record set straight, but I don’t take offense to it personally, no.”

Asked once more if Williams is being “accurate” when he said the helicopter he was in took fire, Krell replied, “Yes, that is a true statement.”

Krell’s account appears to directly contradict those given by crew members in the leader chopper, who told Stars and Stripes that Williams was “nowhere near that aircraft or two other Chinooks flying in the formation that took fire.”