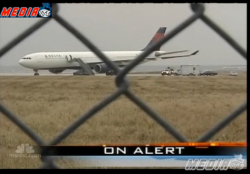 Tonight, the White House is calling an attempt to detonate a bomb aboard Northwest Flight 253 an attempted terror attack, by a man who himself claims to have been sent by al Qaeda — and MSNBC is showing “Disappearance at the Dairy Queen.” Fox and CNN are on the story with updated information and ongoing.

On CNN, Ed Henry is reporting from Hawaii, where President Obama’s vacation was just seriously interrupted; Fox has a counterterrorist expert on the phone talking about the incident and the potential ramifications. On MSNBC, Christina Brown broke in for about a minute with a quick report, before taking the audience back to their program.

There are so many questions here — did the suspect, 23 year old Nigerian Umar Farouk Abdulmutallab work alone, or does he have teammates? And were they on his flight, or on other flights? Or are there flights scheduled to go out tomorrow that may yet have terrorists on board? How did Abdulmutallab get the bomb on board — or was it all there?

Now, Fox is interviewing a passenger, who was sitting in front of Abdulmutallab, who says that the security was pretty tight. MSNBC has some sort of jailhouse interview with bad sound. On CNN, Ali Velshi is talking to Rep. Peter King (NY), the senior Republican on the House Homeland Security Committee and just switched to Peter Bergen, their terrorism expert. According Bergen, Abdulmutallab told authorities that he procured the materials used for the potential explosive device in Yemen. Yesterday, an airstrike by Yemeni forces targeting an al Qaeda hub killed 30; reports that radical cleric Anwar al-Aulaqi, linked to Ft. Hood shooter, army psychiatrist Nidal Hasan, was not among them. According to Bergen, Yemen is becoming a major hotbed for terrorist activity. He also reminded Velshi that so-called “shoe bomber” Richard Reed attempted his mid-air bomb attack around this time of year.

Yeah, it’s Christmas. THAT’S THE POINT. If you’re going to call yourself a news network, then cover the news.