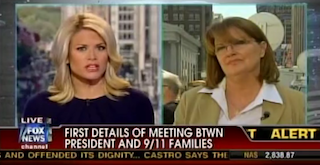 Today, President Obama visited Ground Zero and met with those affected by 9/11. Somehow, however, his visit seemed to look different to every person who witnessed it. Particularly cable news channels. MSNBC seemed thrilled as they eagerly discussed how the visit would totally show up tonight’s Republican debate. Meanwhile, Fox News was less enchanted. Witness the network’s interview with Debra Burlingame, a 9/11 widow, who was brought on to discuss Obama’s meeting with the victims’ families. That subject was broached for about two minutes before transitioning into a seven minute conversation of how Obama and Eric Holder are completely beholden to the “hard left.”

First though, Burlingame described the meeting as a very “social” and “informal” affair with the President telling everyone that he wasn’t going to make a prepared speech but, instead, go around and talk to each table personally. When he got around to Burlingame, she used the moment to press him on Holder’s controversial investigation into the CIA’s “enhanced interrogation techniques.” When Obama told her he didn’t have the power to order the Attorney General what to do, she pushed him to make a public statement on it. He said he wouldn’t and walked away, an action which seemed to leave Fox News’ Martha MacCallum visibly aghast.

Now, please don’t get me wrong. The day I try to tell a woman whose brother was a pilot of the plane that hit the Pentagon what she can and can’t say to the President or while on TV is the day I give you all permission to take away my laptop privileges. She has been a vocal proponent of these families ever since that fateful day as well as one of the strongest voices reminding America not to forget about the threats it faces and she presented her case here with the gusto of someone who had done their research and knew exactly what they were talking about. However, from her previous comments (including those on the network itself), Fox News knew exactly what this segment was when they booked a guest who is self-admittedly one of Obama’s “most ardent critics” to be their “very first account” of the meeting. This may have been labeled as a “News Exclusive” by the large graphic that preceded it, but I doubt anyone going in intended this to be anything other than editorial.

It’s just further proof that, when it comes to all of the hoopla surrounding Bin Laden’s death, Fox News, like MSNBC, are really more interested in what will hurt or help President Obama.