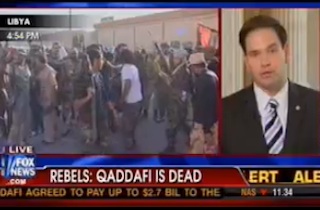 Earlier today, reports surfaced that former Libyan dictator Muammar Gaddafi had been captured and killed by rebel forces. And since its never too early to consider the political impact of any big news, let’s first take a look at Senator Marco Rubio (R-FL), who appeared on Fox News this morning and seemed to give more credit to French and British-led NATO forces over anything accomplished by U.S. forces, or the Obama administration. Sour grapes, or just politics as usual?

President Obama has been consistently criticized by conservative commentators for his foreign policy approach in Libya, specifically the notion of “leading from behind,” which was an anonymously sourced comment from a White House staffer regarding the administration’s approach. Rubio owned his previous critique, and qualified it by adding that he wished Obama had simply acted sooner in initiating action, a note also hit by former UN Secretary John Bolton during his appearances on Fox News.

MacCallum skeptically asked the Senator that “no doubt the White House will take some form of credit for what has happened here.” In a classic rhetorical tactic, Rubio qualified his comments by saying that he was “glad that it’s all working out,” before adding “But it’s the French and British that led on this fight, and probably even led on the strike that led to Gadhafi’s capture or, you know, to his death.”

Rubio ends by calling for a limited role for the U.S. forces moving forward, which seems like a reasonable and prudent approach, even if it was apparently at odds with Senator Rubio from one minute ago.

Watch the clip below, courtesy of Fox News (followed by a rough transcript of the exchange via TVEyes):

Martha MacCallum: No doubt the White House will take some form of credit for what has happened here because, you know, they got together a group of nations, got NATO involved in the all of this. What do you think of the way the white house handled it so far? is.

Marco Rubio: Well, first of all, I’m glad it’s all working out. Ultimately, this is about the freedom and liberty of the Libyan people. But it’s the French and British that led on this fight and probably even led on the strike that led to Gadhafi’s capture or, you know, to his death. So that’s the first thing. The second thing is, you know, I criticized the president. He did the right things, he just took too long and didn’t do enough. Let me tell you the consequences of that. There are thousands of shoulder-fired rockets that are now missing, a country that’s been significantly eroded and rebuilt. A lot of people who are dead, a lot of young men who have to go into rehab and recovery from their war wounds. A lot of this could have been avoided if we had gotten involved early and decisively. These scenes you’re watching right now, the capturing and killing of Moammar Gadhafi would have happened months ago, and Libya would have been well underway. Instead, the months of uncertainty have allowed for some other issues to arise that may be problematic.

MacCallum: Very quickly, what role should we play going forward?

Rubio: Well, a limited one. They want to pay us, they want to reimburse us for the cost of what we do to help them, and the number one thing they wanted was help treat their wounded warriors. They’re not just asking us to do it, they’re asking the world community. There are frozen assets that belong to the libyan people, they have pledged to use those fund to reimburse us for the costs of doing that, and I hope we will.