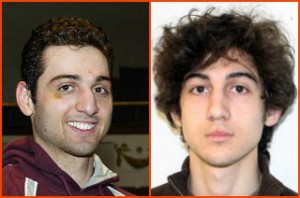 Since the identification and apprehension (both dead and alive) of Boston Marathon bombing suspects Tamerlan Tsarnaev (reportedly shot and run over with explosives strapped to him, amid unconfirmed reports he was clutching an “ACME Co.” receipt) and Dzokhar Tsarnaev (apprehended as a result of history’s first heroic nicotine fit), there has been a rush to triumphantly point and laugh at liberal commentator David Sirota‘s preference that the bombers turn out to be like the cheese on his ham sandwich: white and American. As it happens, both of them turned out to be Caucasian, and one of them was American, but we can’t allow their actions to define all Caucasian-Americans.

Lucky for white Americans, Sirota was at least half-right: when perpetrators of horrific acts turn out to be white, there is some phenomenon that causes their whiteness to become completely irrelevant, even if they are actually from the place where whiteness gets its name. Until Friday, I always thought “caucasian” was just a name that some fancy racist thought up to make white people sound better than “negroids” and “mongoloids,” but it turns out there’s a real place called Caucasia, and the Boston bombing suspects are from it.

Despite that fact, and despite the fact that their region of origin has been heavily reported as “the Caucasas,” you would never know that these guys were Caucasian, let alone white, from the way cable news has been reporting on them. With the exception of Sunday morning’s Melissa Harris-Perry show, the only cable news description of the suspects as “Caucasian” came from Massachusetts State Police Col. Tim Alben, during a press conference.

That’s because David Sirota didn’t count on the one possibility that could nullify a white American bomber: a white American Muslim bomber. Whatever you think of Sirota’s expression of his premise, or the timing of it, the results support it: white privilege means never having to say you’re sorry for what other white people did. Not now, not ever. The skin color that was so relevant early in the week disappeared like a white rabbit in a hat, replaced by a Muslim rabbit with no discernible coloration. Ta-daaa!

The flipside of the white privilege that Sirota described was discussed concisely and effectively by Melissa Harris-Perry‘s panel Sunday morning. Muslim-American researcher Zaheer Ali pointed out that “Many Muslims around the country, before the identities of the suspects were known, said ‘Please don’t let them be Muslim,'” and recalled, similarly, “growing up, we said please don’t be black, right?”

“You had a case that at the Boston Marathon where a young 20-year-old Saudi was running like everybody else from the bombing, and he was tackled because he was suspected as being one of the bombers,” he added, “so being Muslim in America post 9/11 is being both being a victim of terror, and also being afraid of being a suspect of terror.”

Sikh-American activist and film-maker Valarie Kaur pointed out another example of the double-standard that Sirota described. “Let’s remember that the Oak Creek mass shooting was actually the last incident of domestic terrorism in this country,” she said. “It was committed by a white supremacist who walked into a Sikh house of worship. We did not hear calls for white people to be profiled, we did not hear Christianity denigrated, or Christians living in fear. The way that our country diagnoses a problem when it’s a white perpetrator, it’s an individual problem.”

But it’s not just being Muslim that obscures the whiteness of “big C” and “little c” caucasians alike. When white perpetrators of mass horror are involved, media figures will latch onto even the most irrelevant of descriptors to define them. The Aurora mass shooter was alternately described as a Tea Partier and autistic, neither of which was even true, but when was the last time someone falsely claimed “some white dude” did it? This doesn’t feel like a privilege, but that’s the entire point of white privilege: you have to not enjoy it to see it.

In the Boston Marathon bombing suspects, we have a test case that seems to conclusively prove Sirota’s broader point: the minute they were identified as white, their skin simply ceased to exist. That wouldn’t be the case if they were more “visibly” Muslim, like that Saudi student who was wrongly targeted. This matters because if they hadn’t been white, someone might have noticed them straining through the crowd with 20-pound-plus backpacks, and placing them on the sidewalk unattended, or have picked up on some other behavioral tic. As irrelevant as skin color is when it is mentioned, failure to mention it now promotes an unearned comfort with those who look more like us.