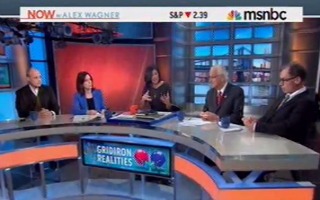 If God is a Republican — which, given the results of the 2012 election, is highly unlikely — the almighty will ensure that progressives take their cues about public policy from MSNBC’s Now with Alex Wagner.

On Wednesday, MSNBC’s midday panel program invited influential liberals and progressive policy makers on to debate the merits of regulating the game of football at all levels – from the NFL to secondary school. The object is to prevent violent injury and protect those too foolish to make what the MSNBC panel felt was decisions in their best interest. Surely, conservatives everywhere join this panel in supporting progressive legislators who may want to take up this cause.

The subject of violence in football was most recently broached by President Barack Obama who told The New Republic’s reporters that he would have a hard time agreeing to allow his hypothetical son to play the notoriously violent sport. With that, progressives everywhere had license to fantasize about saving football players everywhere from themselves.

“In terms of regulating this stuff, there is such a narrative in Washington about government overstepping its bounds – government getting overly involved,” Wagner began. “Do you feel like there is bipartisan support to regulate safety in the NFL?”

Rep. Bill Pascrell (D-NJ) said that there is growing support in Congress for new NFL regulations, including government-mandated education programs about on-field safety.

Katrina vanden Heuvel, editor of The Nation magazine, suggested that the NFL has some culpability when players are injured because of its historic efforts to cover up the threats to personal safety that NFL players face.

What was not surprising in this clip was the instinct to dismiss any opposition to the federal regulation of football as the knee-jerk reaction of an ill-informed populace clinging to their barbaric fetishes.

Yes, progressives, the risks associated with playing professional – even college and high school-level football — are extraordinarily high. The rewards for those players skilled and fortunate enough to receive college scholarships or be drafted into the NFL are equally high.

No one is forced to play football. Each man who chooses this path is aware of the risks they are assuming.

There is no convincing those who perceive themselves to be the betters of those who would assume such risks that they are undertaken clear-eyed and voluntarily. Progressives who seek to regulate the game of football, (or the consumption of foie gras, or the light bulb you can purchase, or your right to own a firearm) presume that the individual who embarks on this dangerous path is simply ill-informed about the threats they face – or too feeble-minded to comprehend those threats.

But, as an opinion writer with a conservative bent, it is not my intention to dissuade progressives from embarking on a crusade to regulate the game of football. May they ever seek to bubble wrap life’s sharpest edges. Conservatives could not hope for a greater illustration of liberal paternalism.

Here’s hoping we pursue yet another national conversation –- it is one the American right will welcome.