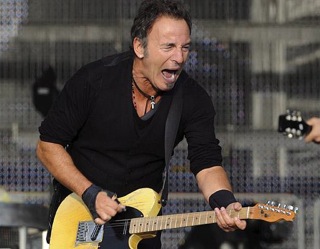 Out of the number of marginal but pretty interesting stories in the sea of the news cycle today comes this bizarre 60 Minutes/Vanity Fair poll from Politico, asking Americans who they would want to compose a new national anthem for the United States if they had to choose. 22% of Americans chose New Jersey artist Bruce Springsteen, the most of the artists on the poll. Trailing behind Springsteen were Dolly Parton, Stevie Wonder, Bob Dylan…and Jay-Z.

The entire experiment begged the question: would Springsteen really be the best-equipped American artist to write a new national anthem? Have millions of Americans been duped into thinking Springsteen’s gritty realism is an accurate representation of the American people?

Point: Bruce Springsteen Should Not Be Allowed Within Three Feet Of The National Anthem (Frances Martel)

Putting aside that the idea of writing a new national anthem and giving the job to a pop star is already a dubious proposition, Springsteen is among the least equipped for the job of writing a song with the emotional impact of a national anthem. For one, Springsteen represents only one facet of the American experience– namely, faux working-class populism dressed in incoherent mumbling and sandpapered vocals. Plus, Springsteen’s brand of lazy contrived global concern appeals to the two types of Americans a national anthem should appeal to the least: the media and, as Politico notes, politicians.

America is a land with a rich history of politicians that evoke universal respect and command the emotions of America far better than Springsteen, the aforementioned Stevie Wonder above them all. But beyond that, if we’re going to upend the national anthem and replace it with something more modern, why go with a artist that peaked in the late 1970s? I don’t know about you, but when I imagined the future, I imagined everyone in silver space outfits listening to techno. Space outfits aside, it would make significantly more sense to write an anthem for the 21st Century with the tools of the 21st Century: synthesizers. The dingy guitar riffs one typically associates with Bruce Springsteen have little to do with the America of 2012, and plenty of talented electronic artists have the ability to be just as patriotic as the man who rebuffed Ronald Reagan.

Counterpoint: Get Over It…Bruce Springsteen Would Be Fine…But Johnny Cash Would Have Been Better (Andrew Kirell)

Like my colleague, I will ignore the silliness of this poll’s existence, and attempt to address it with a straight face. So let’s say this actually did happen: Congress decides to pick a popular musician to write a new national anthem, and Springsteen is the choice. It would be fine. Sure, his post-Born in the USA albums feel like a caricature of faux-populism, but if Springsteen were to reverse-age and combine the nervous excitement from Born to Run, the urban jungle chaos of The Wild, The Innocent, and the E Street Shuffle, and the stark realism of Nebraska and The River, we’d have a fitting national anthem; one that encompasses the many facets of the American Dream (when it goes right, and when it goes wrong).

That being said, the Boss wouldn’t be my first choice. Bob Dylan got 11% of the vote in this silly poll, and I’d argue that he is more deserving (even though most Americans wouldn’t understand a single word he says). But my true pick would be the late Johnny Cash. His spoken-word song, entitled “Ragged Old Flag,” is a heartfelt tribute to the flag that stands for a country that has withstood the scandals of bad government, bloody warfare and strife. He often introduced the song by defending the right to burn the American flag, but also the right to own a gun. That’s the true American spirit…and it’s better than anything Frances Scott Key ever wrote: