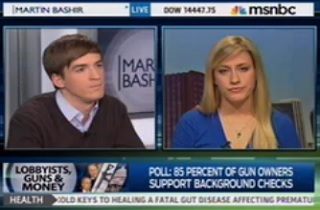 On Monday afternoon’s Martin Bashir show, fill-in host Karen Finney and guest Stephen Barton, a Newtown resident who survived the mass shooting at an Aurora, Colorado movie theater, had their discussion of gun regulations completely derailed by the lies and distortions of the conservative panelist who was booked to provide “balance.”

Although Finney and (especially) Barton did a decent job of knocking down conservative strategist Celia Bigelow‘s steady stream of unimaginative talking points, this all-too-common cable news spectacle is a deadly waste of time.

The segment was pegged to this past weekend’s dueling interviews between New York Mayor Mike Bloomberg and NRA executive Wayne LaPierre, but the minute Finney engaged Bigelow, the conversation bogged down into Bigelow trying to talk past Finney, and pepper her with as many talking points as possible. First, she tried the “But I love the gun  laws we already have” concern troll, wishing that police would spend time busting applicants who are denied guns, instead of trying desperately to keep up with the criminals who actually manage to get guns, thanks to the background checks the NRA opposes.

Even though prosecuting applicants is not the point of background checks, Finney capably engaged the talking point by pointing out that “The truth of the matter is, a lot of times the prosecutions don’t happen at a federal level, but at a lower level.”

She also pointed out that the existence of a flawed system is not an argument against a better system, and tried to ask Bigelow what possible reason a person could have to oppose background checks. Instead, Bigelow selected a different question to answer, focusing on a provision of Sen. Chuck Schumer‘s bill, which she said would mean that “if you have a lost or stolen gun, and you don’t report it in 24 hours, that’s a felony, and you will be sent to jail for five years,” and added that “Actually (so you know she’s not making it up), I have a very close family member who has done a lot of moving, and lost an antique rifle of his. It’s probably somewhere in his packages, but he would have been jailed for five years had he not reported this gun.”

Unfortunately, Finney probably hasn’t read that bill, and was unable to inform Bigelow that her totally real “close family member” probably wouldn’t have gone anywhere, since the antique gun wouldn’t have been used to shoot someone’s face off if it was lost in his packages. If it turned out not to be in with the “packages,” and was used to shoot somebody’s face off, that relative still wouldn’t necessarily go to jail at all, since the law provides for a minimum penalty of a fine, and a maximum penalty of five years in prison, and even then, only for “knowingly” violating the law. If you ask me, five years is chump change for an asshole who loses his gun and gets someone’s face shot off because he couldn’t be bothered to report it, but that’s beside the point. None of this has anything to do with background checks.

Celia then came out against any and all laws, as gun nuts often do, by arguing that “criminals don’t follow the law.”

The segment also featured the despicable robocalls that the NRA is targeting at the Newtown area, but soon returned to gun-nuttery with Bigelow’s familiar insistence that assault weapons are only cosmetically different from other guns. More time was wasted as Finney tried to ask a question about the law, only to be chanted at by Bigelow, before asking Barton to respond.

“You know, sure, an AR-15, it looks scary,” Barton said, “but it also far more deadly than a handgun. It’s easier to manage. The bullets are fired at a higher velocity. When ambulances were called to the scene at Sandy Hook Elementary School, none of the victims were alive, or even had any chance. They were pronounced all dead on arrival. So, I mean, this isn’t a cosmetic difference. To suggest so is an insult to everyone who’s ever been affected by that sort of violence.”

“That is not a fair argument,” Bigelow protested, but Finney had to end the segment before she could roll out another time-wasting talking point.

Almost all of the seven minutes of this segment were completely wasted arguing with an obvious bad-faith actor, which is pretty much the model for gun debate on cable these days. I had a measure of appreciation for Piers Morgan‘s relentlessness on this issue, until he continued to book Dana Loesch even after she said we have the right to own the same weapons our nation’s enemies do. I’ll give everyone credit for pure intentions, but arguing with these people is a waste of time. This is how they beat you, on every issue, by wasting your time.

People like Cecila Bigelow should not be booked on any news show (that intends to serve the public) until they demonstrate that they can answer the questions that are actually being asked of them, like why we should have a background check system that advertises to criminals and terrorists that they can buy all the guns they want at gun shows, or why they need an AR-15 for home defense, when a pump action Mossberg will do the same job better, or why their need to avoid the hassle of reloading at the range outweighs the life of a nine year-old girl? Give ’em one lie, one evasion, and throw them the hell off your air.