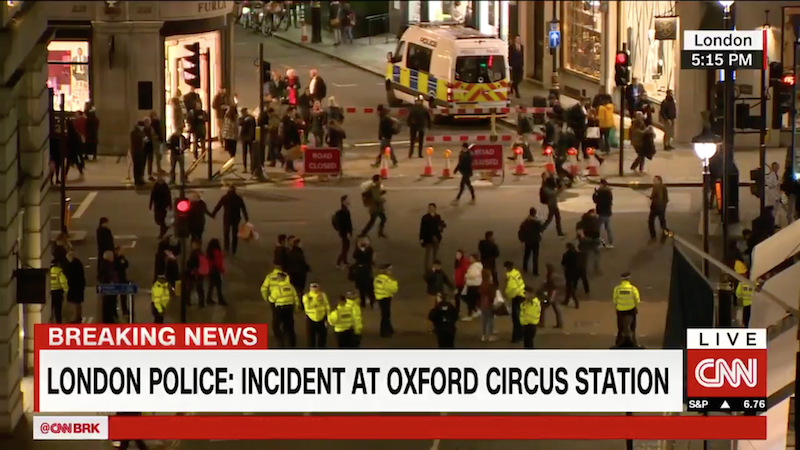 Police are investigating an incident at a London stop, with reports of people fleeing from the busy Oxford Street tube station in terror.

If you are on Oxford Street go into a building. Officers are on scene and dealing. More info when we can

Police called at 16:38 to a number of reports of shots fired on #OxfordStreet & underground at Oxford Circus tube station. Police have responded as if the incident is terrorist related. Armed and unarmed officers are on scene and dealing along with colleagues from @BTP

Witnesses on the scene have reported seeing a man with a gun and there have been reports of “gunshots” being fired, though information is scant at the moment.

Guy with gun on #oxfordstreet near #oxfordcircus I’m in the middle of it. Currently taking cover in French Connection

The BBC has confirmed that police are on the scene.

The British Transport Police Authority has released a statement, noting that, thus far, only one person has been injured, though without giving information as to how she was injured.

“At this stage we have received one report of a woman receiving a minor injury,” the statement read. “There are no reports of casualties.”

London’s Metropolitan Police have released a statement, suggesting that the earlier report that shots had been fired may have been erroneous.

We have not located any trace of suspects, evidence of shots fired or casualties. Officers still on scene. If you are in a building stay there, if you are on the street in #OxfordStreet leave the area. Officers continue to search the area. More updates as soon as we have them

It looks like London’s Tube service has been restored to Oxford Circus. Still no information as to what happened to cause the panic though.

Oxford Circus and Bond Street stations now both reopened and all trains are stopping normally.

London’s Metropolitan Police has said they have stood down and have asked those seeking shelter in nearby businesses to leave. In other words, the storm has passed, though we still have no idea what kind of storm it was.

Our response on #OxfordStreet has now been stood down. If you sought shelter in a building please now leave, and follow the direction of police officers on the ground if you need assistance

London’s Metropolitan Police have released a series of tweets that explain the incident and the thought process that went into treating it as a possible terror attack.

At about 16:38 we started to receive numerous 999 calls reporting shots fired in a number of locations on #OxfordStreet & at Oxford Circus tube station. Given the nature of the info received we responded as if the incident was terrorism, including the deployment of armed officers

Additional officers remain on duty in the West End to reassure the public. We thank the public for their patience and assistance during our response. If you see anything suspicious dial 999 immediately #OxfordStreet

Eyewitnesses have stated that the whole ordeal was sparked by a fight between two passengers and had nothing at all to do with a terror attack.

I was on central line platform at #OxfordCircus at 4:35pm when a man 5ft from me bumped into another man on the overcrowded platform. They exchanged words then a punch to the gut. Then a full out fight. People were trying to break it up. Cont. next tweet.