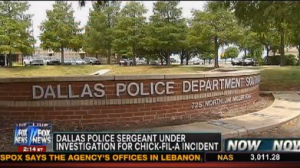 A Dallas police sergeant named Mark Johnson has been transferred and reassigned to an overnight shift while being investigated over an incident involving a Chick-fil-A sandwich.

Johnson, you see, is said to have entered into the station’s briefing room with a Chick-fil-A sandwich on “Chick-fil-A Appreciation Day” — a day organized by Mike Huckabee in support of comments made by Chick-fil-A’s CEO regarding same-sex marriage. Two lesbian officers at the station filed a complaint claiming that Johnson placed the sandwich directly in front of them during the briefing — which allegedly included information about the Chick-fil-A demonstrations going on that day — and acted in a manner that left them “embarrassed and humiliated” because he had been trying to “send them a message.”

Now. I wasn’t in that briefing room, difficult as that may be to believe, and I don’t know what exists within Mark Johnson’s heart. Maybe the guy just happened to stop by a Chick-fil-A on that particular day because their waffle fries are delicious.

But this is the problem with people politicizing food (and other products): It runs the risk of turning what could have just been a nice, if slightly greasy, meal into a statement and, possibly, a (figurative, calm down) weapon against his co-workers.

Guys. I hate this story. I hate this Chick-fil-A so, so, so much and I harbor an intense dislike for every single person involved. I hate it all with the burning intensity of sixty-seven thousand deep fryers. Because now my chicken biscuit is not just slowly turning my internal organs into a (rich, probably delicious) gravy, it will be viewed, at least for the foreseeable future, as not only a deliberate and political choice, but a potential weapon. And that is a terrible thing to do to a chicken sandwich, particularly since the media (a machine of which I am a part, yes, guilty) continually fails to recognize that people reserve the option to not care at all, and to exercise that apathy accordingly.