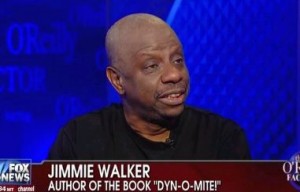 70s sitcom star Jimmie ‘JJ’ Walker sat down with Bill O’Reilly in an interview today that mostly hit on Walker’s dissatisfaction with President Obama. Walker described Obama as someone who makes you feel good, but the economy is still in bad shape and it’s not enough for African-Americans to keep supporting him simply because they like him.

Walker made it clear he also likes the president, but “he’s not a good guy for the job we have to do.” O’Reilly said to Walker that when he says things like that, he must get lots of pushback from the African-American community. Walker explained why Obama’s race simply isn’t enough for him to get black support.

“You just can’t blindly vote for somebody just because they are your – sometimes, even a brother, you have to let him go.”

He encouraged African-Americans to keep the focus on policy instead of any racial factors.

In the second half of the interview, Walker was equally harsh on none other than Jay Leno. He argued that unlike his late night predecessors, including Johnny Carson and Steve Allen, he hasn’t used The Tonight Show to give a national platform to aspiring performers, and since he’s the top dog on late night now, he has the power to do that. Walker said Leno should feature more young talent on his show to give them a great opportunity.