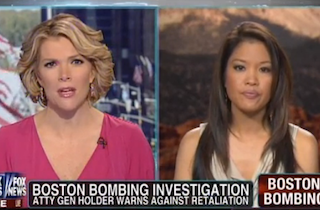 Speaking to the Anti-Defamation League on Monday, Attorney General Eric Holder discussed the Boston Marathon bombing and warned against “misguided acts of retaliation” and stigmatizing groups of people. Michelle Malkin joined Megyn Kelly on Fox on Tuesday afternoon, criticizing Holder for insinuating prejudice against the Muslim community when, she said, such “misguided” intolerance hasn’t actually occurred.

“But I also want to make clear that — just as we will pursue relentlessly anyone who would target our people or attempt to terrorize our cities — the Justice Department is firmly committed to protecting innocent people against misguided acts of retaliation,” Holder said. “As Americans, we must not allow any group to be stigmatized or alienated. We must not tolerate acts of hatred. And we must reaffirm every day — through our actions as well as our approach — that justice and public safety are not in tension. They rely upon one another.”

Holding up the text of Holder’s speech, Kelly highlighted how he spent majority of the speech devoted to the retaliation aspect. Though Holder didn’t explicitly speak about the Muslim community, Kelly and Malkin inferred as much from the attorney general’s implications (and, obviously, from the recent discourse about the issue).

Malkin expressed “disgust” and “befuddlement” at Holder’s remarks and the “warped priorities” of the Obama administration. The “pandering to the politically correct grievance mob” isn’t a new phenomenon, she argued. Their logic also contradicts the “say something, see something” idea, Malkin added.

“That’s the big life,” she asserted. “They don’t want you to say anything about these Islamic jihadi threats.”

“If there was some epidemic of retaliation against Muslims in the wake of what we saw two weeks ago, okay,” Kelly jumped in. “But there hasn’t been.”

Holder, she added citing Mark Levin, appears to be drawing moral equivalence between the attack and ignorance about Muslims. Malkin agreed, citing groups that have claimed a “climate of intolerance” and sought to find evidence of systemic discrimination.

In reality, she added, the administration “should be praising America for showing the kind of fair-mindedness and restraint in response to these terrorist attacks that you never see from the jihadis or the jihadi apologists themselves.”