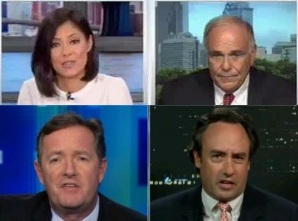 In the aftermath of Friday’s horrific mass shooting in Aurora, Colorado, the inevitable criticism that some are “politicizing” this tragedy has been leveled frequently. While some of this criticism is legitimate, there have been suggestions that MSNBC’s NOW with Alex Wagner and CNN’s Piers Morgan crossed the line when they dared to even discuss gun policy on the same day the shootings took place. If that’s the definition of “politicizing” this event, then I’ve got news for you: that’s our job.

Part of the problem is our selection of the term “politicize” as a shorthand to describe much narrower types of political/media behavior. For example, Bill Maher‘s brief Twitter heckling of American Exceptionalism was decidedly political, but its more glaring flaw was its poor taste and questionable logic. When ABC News’ Brian Ross decided to report (and later apologize) that the shooter might have been a member of the Tea Party, you could hardly blame conservatives for feeling that some form of political bias was at work, but given the prevalence of Joker iconography in the Tea Party, it wasn’t a totally random thread for Ross to pull on. His crime was gross irresponsibility, in reporting something he admittedly hadn’t confirmed. Ditto a report that the shooter was a registered Democrat, with the added feature of trivializing the massacre into a media victimization tit-for-tat.

While there’s a political dimension to all of these criticism-worthy examples, their failures are measurable from an apolitical standpoint. The same can be said of many other potential pitfalls in a story like this.

An event like the Aurora shooting presents the same set of challenges as any news story, but with an added weight of responsibility and sensitivity. It’s important to remember that the people who lost their lives aren’t able to speak for themselves anymore, so we must be careful not to presume to speak for them. It’s a good bet that they held diverse views on the policies that this shooting evokes, and so their lost lives should not be marshaled to bolster an argument. Any political or media figure who claims “they would have wanted…” or “their sacrifice will only have meaning if…” is guilty of exploitation, however well-intentioned.

However, journalists (including commentators) have a responsibility to those lost souls, as well, and to those they left behind, and that is to do our jobs, and to do them well. That means reporting the facts as they are available, and placing them into a context that is useful to people. That includes discussing the laws and policies that relate to this story, in as sensitive and responsible a manner as possible. To be sure, there are wrong ways to do that, but the criticisms I’ve seen, from people like Howard Kurtz, Prof. David Kopel, and our own Noah Rothman, have been based on the premise that they shouldn’t have been discussed at all on the day of the shooting. (In Noah’s defense, he also complained that MSNBC didn’t present a pro-gun viewpoint for “balance,” but that undercuts the central complaint; it’s only “politicizing” if you disagree with the commentary?)

This attitude, while possibly rooted in an admirable instinct for caution, suggests an abdication of the primary responsibility of journalism, which is to serve the public by informing them. Once the immediate reporting of the event has passed, people want to know things, like how any citizen is able to obtain a weapon capable of firing 100 rounds without reloading. People want to know what our gun laws are, and why they’re like that. In the political/media bubble, such issues are second nature, but the average news consumer might have no idea about them, and I defy anyone to demonstrate that they’re somehow less important than the shooter’s dating profile.

When an incident like this happens, no one rushes into the hospital to tell doctors not to “medicalize” a tragedy, and while the news media’s job pales in relative importance, we have jobs to do, jobs that are most important and most challenging at a time like this. Anyone who isn’t prepared to do their job is welcome to find some other line of work, but at a minimum, they ought to lay off the people who are.