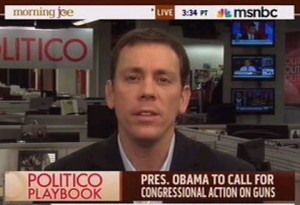 Although news organizations are reporting that Rep. Steve Stockman (R-TX) invited gun enthusiast and presidential quasi-threatener/treason aficionado/fecal fashionista Ted Nugent to attend Tuesday night’s State of the Union Address, the real force behind Nugent’s guest shot is the Jedi mind-trickery of President Obama. So says Politico Executive Editor Jim VandeHei, who told Morning Joe‘s Joe Scarborough, this morning, that the President wants to see images of gun violence victims “sitting in the chamber side by side with Representative Stockman and Ted Nugent” in order to “continue to make Republicans look cartoonish with gun control.”

Scarborough began by noting former President Ronald Reagan’s support, and lobbying for, the 1994 assault weapons ban, and said that tonight, Republicans “have to decide whether they want to be the party of Ronald Reagan or Wayne LaPierre.”

“I think what the President wants to do with this speech tonight,” VandeHei said, “is to continue to make Republicans look cartoonish…. with gun control. What they would like to see tomorrow are images that you just painted, of victims of these shootings sitting there in the chamber side by side with Representative Stockman and Ted Nugent, and whatever they will say after the speech, and you know they will say extremely incendiary things, and cable TV is not going to be able to resist the incendiary things that Ted Nugent and Steve Stockman will say, so that’s the juxtaposition the White House wants.”

In that one paragraph, VandeHei goes to absurd lengths to avoid assigning any responsibility to anyone other than President Obama. The President isn’t making Republicans look cartoonish; they invited Ted Nugent to the State of the Union. They couldn’t be more cartoonish if they stood up and shouted “Wabbit Season!”

Even poor cable TV is helpless to resist the President’s dastardly plan to get Ted Nugent to say incendiary things that cable TV will not be able to resist (but that Politico will surely ignore), as President Obama puffs on a cigar and says “I love it when a plan comes together!”

Vandehei is absolutely right that Ted Nugent’s appearance, even if he says nothing, is a disastrous one for Republicans. That they felt a need at all to “counteract” the victims of gun violence who will be in attendance is damning enough, but to invite such a clownish, belligerent symbol of unfettered gun-nuttery defies decency. Whatever your beliefs about gun regulation, the choice of people like slain teenager Hadiya Pendleton‘s mother, Cleopatra Cowley, or former Congresswoman Gabby Giffords (D-AZ) as guests are not inherently partisan. They surely all have their own personal views on the subject, but they just as surely are deserving of a look in the eye as their cause is considered. They have earned it.

Where VandeHei is wrong is in thinking that the President, or the White House, or anyone, want to use this speech to make Republicans look bad by placing those affected by gun violence in the same room with Ted Nugent, and not just because of the hurt, the insult it will cause them. What President Obama wants to do with this speech, what the lawmakers who invited those affected by gun violence want to do, is to persuade lawmakers on both sides to reflect on their own beliefs, and to make their decisions, whatever they may be, with these people in mind. It is possible to disagree about gun regulation, while retaining your decency. Senator John McCain (R-AZ), for example, joined Rep. Ron barber (D-AZ) in inviting Gabby Giffords and her husband, Mark Kelly, to tonight’s speech. He knows that whatever Congress decides to do, they will need to walk past Gabby Giffords to do it.

Nugent’s appearance may end up being solid gold for the media, but the President, and everyone else concerned, would surely sacrifice the outrage that will emerge from it in exchange for a serious response to a deadly serious problem.