Politico Reporter: Hillary Hates the Media Even Amid ‘Most Favorable’ Coverage Since ’90s
video

Politico Reporter: Hillary Hates the Media Even Amid ‘Most Favorable’ Coverage Since ’90s 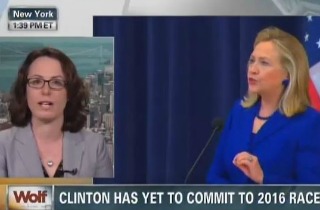 When asked on Thursday by CNN anchor Wolf Blitzer what former Secretary of State Hillary Clinton is “afraid of,” Politico reporter Maggie Haberman answered “the media.” She went on to assert that, based on her reporting, Clinton is frustrated by the scrutiny she has received in the press even though the coverage she has received has been among the most “favorable” since she served as first lady. Haberman added that this frustration with the media may dissuade her from mounting another presidential bid.

“Everyone we spoke to in her circle,” Haberman began, “think that she is very concerned about dealing with the press.”

“It is the process and the grind,” the Politico reporter continued. “This goes back to, as you know very well, the White House era. The 1992 campaign. But that has never really changed for her. She does not enjoy this.”

RELATED: Stewart Rails Against Sexist Treatment of Hillary: Men Can Be Much Bigger Pussies!

Haberman added that, if there was a factor which would prevent Clinton from running for president again, “not dealing with that is way high up there.”

“She is going through some of the most positive press she’s had in a very, very long time,” she asserted. “In terms of the overarching narrative, and the overarching coverage of her, it has generally been some of her most favorable since going back to the White House days.”

Blitzer noted that Haberman was informed that Clinton “hates” her. The Politico reporter said she was aware of that.

Asked if Clinton will run for president, Haberman said her aides say it’s a tossup with a finger on the scale toward a likely presidential bid. “But it is by no means a sure thing,” she concluded.