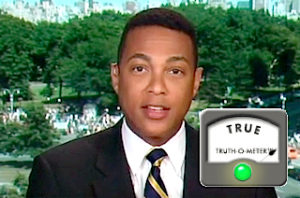 Politifact has officially weighed in on Don Lemon’s comments from this weekend on CNN about race and what African-Americans can do to improve their communities. “true.” Since the site “can’t check Lemon’s opinions,” they instead focused in on “the one verifiable fact he offered.” On the question of whether “more than 72 percent of children in the African-American community are born out of wedlock,” as Lemon and Bill O’Reilly have asserted, Politifact deemed the statement “true.”

Politifact used data from the federal Centers for Disease Control and Prevention, whose most recent report is based on data from 2010. That data does state that 73% of non-Hispanic black births are considered “non-marital” while for non-Hispanic whites that number is only 29%. However, the site said Lemon did “overreach” a bit:

“Lemon did overreach somewhat when he went on to say that the 72 percent ‘out of wedlock’ figure ‘means absent fathers.’ The 72 percent figure refers to children who are born to women who are not married; it would, however, include unmarried couples in which the father is present.”

When you look at the 2011 Census Bureau data for children in single-parent families, the percentage for non-Hispanic blacks drops to 67%, still far higher than the 25% for non-Hispanic whites. Their final “ruling” was as follows:

Watch Lemon’s original comments below, in case you missed them, via CNN: