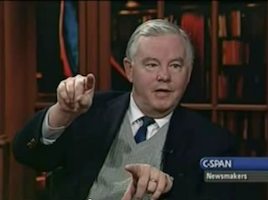 Until this week, things were going remarkably well for the Republicans. The media were giving them a free pass on the BP Oil Disaster, ignoring GOP cluelessness and complicity in favor of scrutinizing President Obama‘s level of spleen. The administration was ducking bombs from Jon Stewart and Keith Olbermann, for f***’s sake. Then along came Rep. Joe Barton (R-Tx) to apologize to BP CEO Tony “I Want My Life Back” Hayward for making it easier for stricken gulf residents to get financial relief.

Will Barton’s gaffe roll off of the Republican Party’s back, or will it stick to them all the way through to the midterm elections?

As soon as I heard about Barton’s gaffe, I predicted that it would immediately pivot the media narrative away from Barack Obama, who was just starting to recover, politically, from a much-maligned speech on Tuesday, and onto the Republicans, who really just needed to shut up and let the mainstream media keep up what it was already doing.

My Twitter friend, former Bush Deputy Press Secretary Tony Fratto, thought it would get little attention outside of MSNBC and the DC bubble, and that it wouldn’t be a political game-changer.

So far, the clip has dominated the news cycle, making all of the nightly network news shows, but only time will tell if Barton’s gaffe will have a lasting impact.

One ingredient that has been missing from the coverage of Barton’s apology is the connecting of dots in a pattern of Republican behavior that has thus far stayed under the radar. For example, I haven’t heard anyone mention that the Republicans opposed lifting the $75 million liability cap, even threatening a filibuster.

It would also be a great time to revisit other pro-BP laughers from Republicans, like Rand Paul‘s assertion that “standing on BP’s neck” was “un-American” (I think he’s fundamentally misreading those “Don’t tread on me” flags), or Texas Governor Rick Perry‘s “blame God” strategy, and his  inability to rule out that a “big wave came along at a very inopportune time” and caused the disaster.

Even the frightening spectacle of what a hypothetical President Palin might do with the oil spill (call the Dutch…even though we already called them) didn’t get much attention.

So, while the Democrats will certainly use this to their advantage for as long as possible, the mainstream media’s inability to provide even a modicum of context might just rescue the GOP once more.

What do you think? Is this a one-weekend blip, or a political game-changer that could echo into the midterm elections?