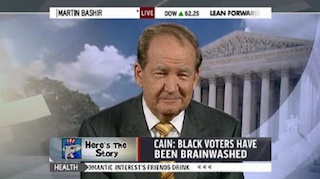 About a couple months ago, Pat Buchanan got in a bunch of trouble when he used the phrase “your boy” in regards to President Obama. At the time, all Buchanan meant was that Obama was the favored candidate of the host he was talking to, Al Sharpton, however, he got caught up (unfairly in this writer’s opinion) in the tricky racial connotations of the word “boy.” You’d think, then, that he’d learn his lesson about the importance of word choice.

Perhaps not as, last night on Martin Bashir, he explained that black voters had been fed too much propaganda from the “liberal plantation.” Hoo boy.

The funniest part is, Buchanan was merely trying to defend the statements of someone else. In this case it was Herman Cain as Bashir asked the appropriateness of Cain calling liberal black voters “brainwashed.”

“I think what [Cain’s] saying is that they bought an awful lot of liberal propaganda on the liberal plantation and I think he’s right.”

Bashir summed up the reaction of most viewers when all he could say was “‘Liberal plantation?’ Wow.”

Look, Pat, we like you. And we don’t think you mean poorly, so here are a some phrases you should avoid in future newscasts:

We’ve got plenty more so, if you ever find yourself stuck and unsure about what to say, feel free to contact us at any time.