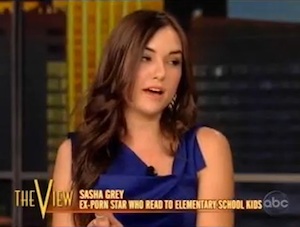 “What if the parents had said, ‘I object’?” moderator Barbara Walters questioned.

“Then I wouldn’t have done it — but there was no notice sent out,” Grey responded.

“That was the issue I had,” panelist Sherri Shepherd noted. “Parents were not informed. My thing was that my son, Jeffrey, is 6-years-old…if he came home and asked ‘who’s Sasha Grey?’ — I would like to let him know, this is a fireman…”

“Reading was very important to me as a kid,” Grey explained. “It was very inspirational to me. I went to a school where that wasn’t encouraged so much but my parents encouraged that and it has made me part of who I am.”

“My question is it always going to be there as a stigma?” Walters asked.

“I’m just curious about the stigma,” Goldberg interjected. “You haven’t killed anybody, you haven’t raped any children, you haven’t vomited, you know, in church–you know what I mean?”

“I don’t have any regrets,” Grey said. “This is something I wanted to go after, one of the large reasons was to stop the stigma that people have against the adult film industry…I grew up ashamed of my sexuality and I felt guilty and disgusted at my sexuality and the more I researched and opened my mind, it felt to me like it was a good decision, and I don’t have any regrets.”

“I would like to devote my time contributing to the community in some form,” Grey continued. “Those kids were so happy.”

Watch Grey defend her community service below via ABC: