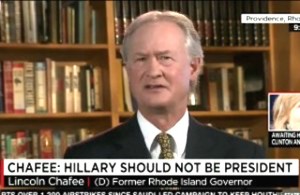 On the day of Hillary Clinton‘s presidential announcement, one of her potential Democratic rivals is pulling no punches.

Former senator and Rhode Island Gov. Lincoln Chafee, a Republican-turned-Independent-turned-Democrat who surprised everyone last week when he announced he is exploring a presidential run, told CNN’s Dana Bash that Clinton had “precious few” accomplishments as secretary of state, adding she was “too close to neo-cons” and “too Bush-like.”

He said Clinton’s vote for the Iraq war when she was a senator is a major reason for his candidacy.

“That was just a moment in time where the premise for going to Iraq was so false that there were weapons of mass destruction — she didn’t do her homework, and we live with the ramifications today,” said Chafee, who was the only Republican senator at the time who voted against the Iraq war.

“And so you may say, oh, that’s 12 years ago, but we live with it today, and it’s a big motivator for why I’m running,” he added. “If you show lack of judgment, lack of doing homework then, what can we expect in the future?”

Chafee also said Clinton’s tenure as secretary of state “was kind of a muscular, top-down, unilateral, too close to neo-cons, too Bush-like.” He all but officially declared his candidacy for president, saying he’s looking forward to the primary and the debates.