Prediction: Democrats Will Hold or Gain in November
video

Prediction: Democrats Will Hold or Gain in November 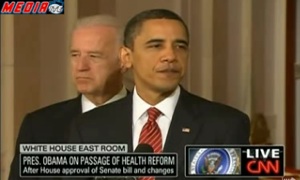 Remember, folks, you heard it here first. With the historic passage of health care reform last night, the Democrats’ fate in the midterms is in their own hands. If you take Republicans at their word, they stand ready to help the Democrats maintain or increase their Congressional majorities.

The key will be the degree to which the GOP campaigns on repealing the reform bill, and the degree to which Democrats embrace their achievement. Either way, the media has begun, and will continue, to shift the narrative in the aftermath of this fight.

One of the big reasons the reform effort stalled in the first place was the media’s affinity for small but vocal anti-health care spectacles like Sarah Palin‘s “Death Panels,” screaming town hall attendees, and POTUS-heckling Congressmen. That fascination will now come to the Democrats’ aid. When the ball is in play, all of these things can be spun as “fierce opposition.” Once the game is over, however, the team that stays on the field and keeps playing just looks crazy.

Just as the substance of health care reform was drowned out during much of the debate, so will the substantive problems with the bill be lost in the laudatory afterglow of its passage. Critics on the left will join the high-fiving bandwagon, with an eye toward building on the bill’s foundation. Just as Tea Parties and Scott Brown energized the base on the right, so will this victory reactivate the energy that carried Obama into office.

On the right, repeal will be a losing argument. The tire-kicking is over, and once the American people drive this bill off the lot, they ain’t bringing it back, except for a tune-up. Republicans would be much wiser to focus on individual fixes, but their incensed base will punish them if they don’t make good on repeal. That’s what happens when you call something an “apocalypse,” and people believe you.

The Democrats, however, never met an advantage they couldn’t squander, or a leader they couldn’t undercut. If they listen to the current conventional wisdom, they will shrink away from important fights on the economy, immigration, and energy policy, convinced that laying low will save their seats.

If, on the other hand, they use this momentum to show the American people that they can get things done, and they get even a little bit of economic good news between now and November, there’s no reason they can’t hold or gain. The choice is entirely theirs.

I asked Robert Gibbs this during today’s White House Press briefing, video of which follows: