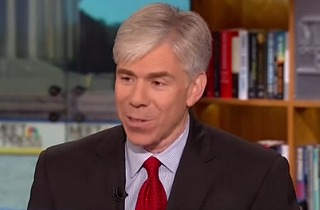 As you may have heard, NBC’s Meet the Press is struggling more than Susan Rice lately on Sunday mornings. A once-dominant program—the longest running in television virtue of being on the air since 1947 — MTP has fallen from first to third for the third straight quarter, sitting behind ABC’s This Week and CBS’s Face the Nation. In fact, the show is currently experiencing the worst ratings in its 74-year history.

Matters hit a low point two months ago when the Washington Post reported that network brass had ordered psychological research of host David Gregory and his family. It was apparently all done in an effort to see how the 18-year NBC veteran could relate to audiences more easily. Regardless of the reasoning (NBC later disputed the characterization of the resource tapped to do the research), the public portrayal of Gregory being in need of any outside help was an embarrassment to the program and network.

All of that said, it is curious to see MTP preempted for the third time in five weeks due to sports programming (English Premier League Soccer on May 11; Monaco Grand Prix on May 25; French Open Men’s Final today, June 8)….especially when considering the current struggles of the program. Note: Meet the Press has been preempted for the Monaco Grand Prix and French Open for years (Premier League is a new development), as the contract for each calls for network coverage of said events (See: NBC Sports Network on cable will not suffice). But with all of the other channels available under the NBC Universal umbrella to allow MTP to avoid being preempted altogether—which only forces its dwindling audience to turn to its competitors and perhaps risks losing them for good—why not move it during the preempt weeks to MSNBC and CNBC?

The recommendation especially applies to the lost show this week. It’s no secret that all of the cable news networks—particularly Fox News—saw ratings increases in light of the Bowe Bergdahl controversy that dominated the week. Pundits and politicos are having a field day with this story. Passions are higher than usual. Audiences are obviously engaged. It was therefore worth it for MTP to call an audible here, as the show would have undoubtedly benefitted and had a higher chance of being newsworthy than other weeks regardless of channel venue. That is, of course, unless NBC execs have no issue with losing badly to CBS and ABC each week…because neither Face the Nation or This Week are ever preempted for any other kind of programming outside of breaking news.

“Meet the Press has always been the must-stop place where news is made and critical conversations take place,” declared NBC News President Deborah Turness in April, “and we will continue that charge while at the same time adapting and innovating with new ideas on all platforms and connecting what’s happening in Washington to Americans across the country.”