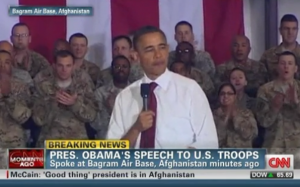 During his surprise visit to Afghanistan on Tuesday, President Obama addressed American troops at Bagram Air Force Base. Ahead of his primetime address, Obama reaffirmed his support for them, telling them, “The reason America is safe is because of you.”

Obama spoke briefly, after signing the U.S.-Afghanistan Strategic Partnership Agreement with Afghan President Hamid Karzai. “When the final chapter of this war is written,” he said, thanking the troops for their sacrifices, “the historians will look back and say not only was this the greatest fighting force in the history of the world, but all of you also represented the values of America in an exemplary way.”

“Not only were we able to decimate the ranks of Al Qaeda,” Obama said, “a year ago we were finally able to bring Osama bin Laden to justice.” The president said we didn’t ask for this war, but that 9/11 brought this war to us. “Each and every one of you, without a lot of fanfare and without a lot of fuss, you did your jobs,” he said.

But “I know the battle’s not yet over,” Obama said. “Some of your buddies are going to get injured and some of your buddies may get killed and there will be heartbreak and pain and difficulty ahead. But there’s a light on the horizon because of the sacrifices you’ve made.

Obama concluded, “I could not be prouder to be your commander in chief.”