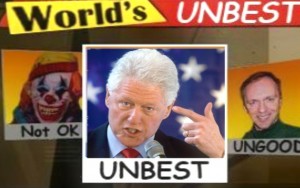 On Thursday, former President Bill Clinton was asked if he would attend the Little Rock C.A.R.E. free clinic today. Rather than simply begging off of the event with the usual non-answer boilerplate about scheduling conflicts, he decided to slam Keith Olbermann for “politicizing” the event, saying Olbermann was “not helpful.”

While it’s tempting to applaud President Clinton’s courage in standing up to Keith Olbermann, I’m going to pass. In a moment, my Unique Utterance™ on the politics of free clinics.

Keith Olbermann, who has dedicated hours of his show, including an entire hour-long episode, to giving voice to the 70-80% of Americans who are being ignored by a handful of Democrats (and all of the Republicans), is the problem? This is the person you choose to single out?

Or maybe the Republicans are a smidge to blame here for trying to make health care reform Obama’s “Waterloo,” and to “break him” right along with the millions of uninsured and underinsured who will be represented at today’s free clinic. Republicans who freely admit to having no real plan, other than to defeat the Democrats’ plan with a list of catchphrases. Republicans like John Ensign, who reasons that his colleagues should oppose the public option because it will be hugely popular. Republicans like John Boehner, who declares the healthcare reform bill the “biggest threat to freedom that I have seen in the 19 years I’ve been here in Washington.”

That brings me to our next culprit, Palin’s enablers in the mainstream media, whose idea of analysis is to examine Palin’s ridiculous fantasy and conclude, (in dumb-guy voice) “Deuhh, maybe she has a point!” They can be further counted on to untangle the important question of who’s shrieking the loudest, and to mischaracterize polls that don’t fit their narrative.

Let’s not forget the forces at work behind the scenes, working to protect and/or multiply their profits if they can’t kill health care reform altogether. The health insurance and pharmaceutical lobbies are chomping at the bit to get a crack at those tens of millions of new customers, as long as there’s no mechanism to hold their prices down.

It’s a good thing they’ve got your old pals, the conservative/Blue Dog/DLC/never-met-an-obstructionist-“Gang of”-they-wouldn’t-join Democrats in Congress. (Fun fact: The Blue Dogs were born in Billy Tauzin‘s office. Yes, that Billy Tauzin.) This is the same group that Keith Olbermann called out by name in another Special Comment for following their campaign cash, including Blanche Lincoln.

Blanche Lincoln, whose political hide you are trying to protect by trashing Keith Olbermann. Blanche Lincoln, who stands to lose nothing politically by supporting real health care reform, instead of watered-down, poison-pilled bullshit that the Republicans still won’t vote for.

That’s the real problem, isn’t it? You think Keith Olbermann is using these free clinics to send a message to Blanche Lincoln. That’s where you’re wrong. The tens of millions of uninsured and underinsured people who will be represented at that free clinic have been sending a message, they are the message. Keith Olbermann didn’t throw them under the politicization bus, sir, you did.

So the next time someone asks you about someone who’s actually trying to do something about getting health care to the people who need it, maybe you should just pop open an ice cold can of STFU. You had your chance.