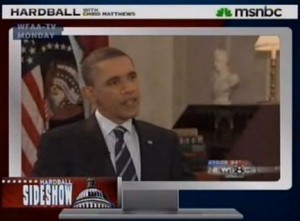 The gulf between the headlines Tuesday, which trumpeted President Obama “Losing His Cool” in the “Outburst Heard ‘Round the World,” and the Clark Kent-esque reality of Obama’s admonition to a Texas reporter, was comically underscored by the fact that current media it-boy Donald Trump treats every interview like he’s the king of a very crowded subway car. Why, then, did Obama’s demeanor cause such a stir, while Trump’s gets nary a mention?

From all of the headlines about President Obama’s interview with Brad Watson, you’d have thought he hit him with a phone book, but all he did was ask the guy to let him finish his answers next time.

Trump, by contrast, peppers every interview with the kind of belligerent entreaties of “Excuse me” that you’d expect to precede an elbow to the face at a Shea Stadium concession stand, yet no one ever makes a peep about Trump’s temperament.

As luck would have it, Hardball host Chris Matthews played President Obama’s  exchange with Watson, followed by a montage of Trump’s nasty manners during his interview with Savannah Guthrie, and while Matthews didn’t draw a comparison, it was as clear as the stamp on President Obama’s birth certificate: (from MSNBC)

The President faces a real Catch 22 when it comes to his temperament. While he’s often criticized for being too cool in certain situations, everybody’s always on the lookout for him to get angry, and they freak out if the needle even hints at the yellow zone. The reaction to President Obama’s “hot mic” remarks at a DNC fundraiser is a great example of this. From the reactions he got in the press, you would think he had done a Sam Kinison routine. Whoah, he pushed back against repealing health care reform. Quick, get the Hannibal Lecter restraint kit!

Trump, on the other hand, spits a Macy’s fireworks display of crazy in every interview, so nobody ever gets around to noticing that he’s being a huge jerkoff. It’s like observing that Multiple Miggs is using the wrong fork.

Now, Brad Watson was well within his rights to try and rein in the President’s answers, which tend to be overly long and message-heavy. With a scant few minutes to interview the leader of the free world, you don’t want to hear a litany of press release boilerplate while your clock runs out. You try and get as many shots on goal as you can.

President Obama was also within his rights to gently admonish Watson, as well. That’s the natural tension between journalist and subject. Watson’s mistake was in editorializing that this meant the President didn’t like to be challenged. That’s the kind of thing that rankles this White House, not “tough questions.”

Through it all, though, the President’s interview with Watson, similar to his pre-Super Bowl chat with Bill O’Reilly, resembled that scene in every Hulk episode where someone started pushing Bill Bixby around as he tries to keep his cool. The difference is, Obama never wakes up in a dumpster with his clothes all torn up, and pieces of brain in his hair.

He doesn’t have to start trashing the East Room and giving reporters the finger, but people respond to the President when he lets some emotion slip out. The middle of the country that barely pays attention, but decides elections, likes it when you take the gloves off for something you believe in, and hates it when you whine about how mean the other guy is being. Remember how that worked out for John Kerry?

Sure, there are people out there who are waiting to paint President Obama as the Scary Black Man as soon as his pulse gets over 85, but those people are never going to vote for him anyway.