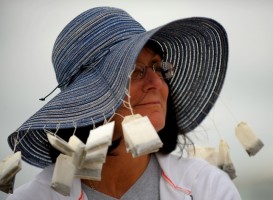 ABC News’ Jake Tapper took heat from “some liberal bloggers” when he contrasted President Obama‘s call for civility in politics with Obama’s use of the term “tea-bagger” in a November interview for Jonathan Alter‘s new book. At issue was Tapper’s failure to point out that the term was originally coined by the Tea Party movement, which he addressed in an update.

WaPo’s Dave Weigel, meanwhile, traces the movement’s attempt to frame the term as a slur. It’s time to correct the record once and for all.

Let me first address the criticism of Tapper’s story. The fact that the Tea Party movement coined the term has little relevance to Jake’s point. In comments to Mediaite yesterday, Dave Weigel summed up the civil way to deal with this:

I like to follow a policy of calling people what they want to be called — or at least don’t object to being called. This is why you don’t see me call people “teabaggers.”

Therefore, the origin of the term isn’t nearly as relevant as whether or not it is now offensive to Tea Partiers (Partyers? Spellcheck hates both), and whether Obama knew this when he said it, or knew of the term’s sexual connotations. You could criticize Tapper for not raising that question, but I think he’s giving the President credit for more intelligence than that.

The origin of the term is relevant in determining the relative size of the Tea Party’s violin. What wasn’t pointed out to Tapper is the fact that the Tea Partiers not only invented the term, they did so in order to inflict a similar double entendre onto the President, the Democrats, and liberals in general. Hence, it’s a violin so small, you need an electron microscope with a zoom lens to see it.

Now, they’re trying to re-cast the term as a slur, on a par with the “n-word,” hurtful to all the Tea Party members who are just ordinary moms, dads, sons, and daughters. The latter point has some resonance, but the former is ridiculous in the extreme.

In emails, protest signs, t-shirts, and online, early Tea Party literature urged protesters to “Tea Bag the White House,” and to “Tea-bag the liberal Dems before they tea-bag you.” The suggestion is that the metaphoric “tea-bags” be shoved in the mouths of the President, Democratic members of Congress, and even ordinary citizens who identify as liberal Democrats. The idea that they just didn’t know the term’s only (at that time) meaning is belied by the fact that they obviously knew it was negative (and non-consensual), since they didn’t want it done to them, and also because it only had one meaning.

It was only after MSNBC’s Rachel Maddow and David Shuster, and CNN’s Anderson Cooper, turned the tables on the term that Tea Partiers objected. They were perfectly satisfied to advocate the metaphoric mouth-rape of liberal men, women, and children, but had the nerve to become indignant when the insult boomeranged on them.

Along with the fact that it was born out of Rick Santelli‘s homeowner-scapegoating rant on the floor of the stock exchange, this was one of the reasons I originally found the movement so offensive, and why I beat Maddow and Shuster to the punch in using the term against them. Just as today’s Tea Partiers include ordinary Americans who didn’t ask for this treatment, the original targets of the term included liberal fathers, mothers, sons, and daughters, including most of my own family.

It is for this reason that I think the term has long since outlived its usefulness. First of all, it stopped being clever about 3 minutes into Shuster’s rant, and morphed into a juvenile schoolyard taunt. “Tea-baggers” then became the media’s favored shorthand for the movement for a time, but now that the objection has been widely registered, that’s no longer the case. The early Tea Party adopters of the term are now a minuscule minority, so it now serves only to insult people who had nothing to do with the original offense, and to buttress the group’s persecution complex.

As I’ve said before, it’s also bad politics. Contemptuously dismissing the Tea Partiers has only allowed them to grow, and to prevent Democrats from effectively countering them.

As for President Obama’s use of the term, I can only guess, but based on the fact that, 2 years in a row, the White House declined to reach out to the group, it doesn’t appear that he’s all that concerned about their feelings.

One final note about Tapper’s story. I often get comments along the lines of “Why didn’t you include this? Why did you omit that?” People need to understand that we’re writing blog posts, not Wikipedia entries. We’re allowed to have a somewhat narrow focus, and can’t cram in every piece of background information in the known universe.