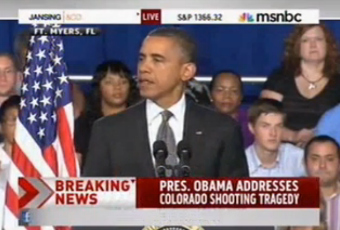 During what was supposed to be a Friday morning campaign speech in Fort Myers, Florida, President Barack Obama addressed the late-night Aurora, Colorado theater shooting that has, thus far, claimed 12 lives and injured dozens others.

“We’re still gathering all the facts about what happened in Aurora, but what we do know is that the police have one suspect in custody, and the federal government stands ready to do whatever is necessary to bring whoever is responsible for this heinous crime to justice,” the president said to applause.

“We may never understand what leads anybody to terrorize their fellow human beings like this. Such violence, such evil is senseless — it’s beyond reason. But while we will never know fully what causes somebody to take the life of another, we do know what makes life worth living,” he continued. “The people we lost in aurora loved and they were loved. They were mothers and fathers, they were husbands and wives, sisters and brothers, sons and daughters, friends and neighbors. They had hopes for the future and they had dreams that were not yet fulfilled. And if there is anything to take away from this tragedy, it’s the reminder that life is very fragile.”

“What matters at the end of the day is not the small things,” the president opined. “It’s not the trivial things which so often consume us and our daily lives. Ultimately it’s how we choose to treat one another and how we love one another…. At the end of the day, what we’ll remember will be those we loved and what we did for others.”

“I am so moved by your support,” he told the crowd of thousands who had hoped to attend a political rally, “but there are going to be other days for politics. This, I think, is a day for prayer and reflection.”

He then called for a moment of silence and ended the speech shortly thereafter to chants of “Four more years!”

Watch the speech below, via MSNBC: