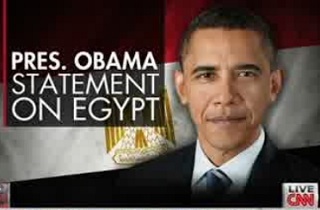 On the heels of escalating violence in Egypt that has reportedly seen over 500 people killed and thousands injured, President Obama delivered remarks to the press, from the site of his Martha’s Vineyard vacation, addressing the situation. The remarks were delivered with audio only, and included a denunciation of the violence on both sides, the cancellation of the Operation Bright Star joint military exercise, and a not-so-veiled warning about “further steps” which could, presumably, include the cutoff of foreign aid if the violence continues.

The violence in Egypt follows the removal of Muslim Brotherhood-backed President Mohamed Morsi, who was deposed by the Egyptian military in July, in response to massive demonstrations. Since then, the United States has refused to say whether this constituted a military coup, because such a declaration would trigger U.S. laws against foreign aid to nations involved in such an overthrow. Supporters of the ousted president have been staging protests, which have led to the latest round of violence.

The press pool seemed ill-prepared for the President’s remarks, as all three cable news networks faded into the speech in progress. The President began by summarizing Egypt’s turbulent recent history, and said, of the coup-which-must-not-be-named, that “After the military’s intervention several weeks ago, there remained a chance for reconciliation and an opportunity to pursue a democratic path. Instead, we’ve seen a more dangerous path taken through arbitrary arrests, a broad crackdown on Mr. Morsi’s associations, and supporters, and now tragically violence that takes many the lives taken lives of hundreds of people, and wounded many more.”

“The United States strongly condemns the steps taken by Egypt’s interim government and security forces,”he continued. “We deplore violence against civilians. We support universal rights essential to human dignity, including the right to peaceful protest.”

The President also announced one specific step, telling reporters that “this morning we notified the Egyptian government that we are canceling our biannual joint military exercise, which was scheduled for next month,” and added that “Going forward, I’ve asked my national security team to assess the implications of the actions taken by the interim government, and further steps that we may take as necessary with respect to the U.S./Egyptian relationship.”

Here’s audio of the President’s remarks, via CNN: